Album Review: Moby Grape – The Place and the Time 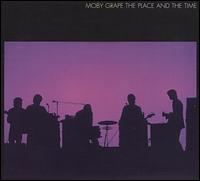 Moby Grape was (and remains) one of those unlucky star-crossed acts that never, ever seemed able to catch a break. From the beginning, things seemed to go wrong for them. They managed to survive the critically disastrous over-hyped debut: while the self-titled album was nearly perfect, the record company’s insisted on feting it with an overblown promo party, and then released all the tracks as single A- and B-sides. Critics smelled hubris.

Then of course came the arrests, the institutionalization, the disappearances, the joining-the-Marines, the homelessness. And none of that even addresses the myriad obstacles to success placed in the group’s way by the (allegedly, sez our legal department) malevolent Matthew Katz. The group found itself unable to tour or release material under its own name. At one point, Katz put together an ersatz Moby Grape with a bunch of other players.

The difficulties continued well into the 21st century. While Sundazed attempted reissues of the first two albums, Katz intervened yet again, effectively getting the discs pulled off the shelves. Yet again, Moby Grape couldn’t get a straight deal. It was almost be comedic if lives, livelihoods and music of great artistic merit weren’t all involved.

In 1993, Sony Legacy managed to put out Vintage: The Very Best of Moby Grape. That 2CD set compiled all of the debut album and most of the second, plus the best of what came after and enough then-available rarities to make the set a must-have for fans of 60s rock. But of course Vintage too would eventually become unavailable. While it can still be found occasionally in used bins, it’s long out of print.

In 2007, Listen My Friends! was released; in effect, it’s a one-disc distillation of Vintage, and will be — for those not familiar with Moby Grape — the place to start. Most of the other albums can be found, but doing so requires a bit of effort.

In 2009 Sundazed released the compilation The Place and the Time. It’s a sort of rest-of companion to the best-of. The disc’s mission is to bring together in one place all of the stray recordings from the group. Demos, alternate takes and such make up its two dozen tracks. But to the uninitiated, it doesn’t have the sound of an outtakes collection. The studio and live takes are all of a high sonic quality, and the performances are first-rate. Some tracks are unfinished-sounding (most famously the instrumental take of “Rounder,” among the group’s finest recorded performances).

The criteria for this set seems to have been: what can we put on disc that Katz doesn’t have right to? Bonus tracks from earlier editions of the group’s albums have all been gathered together here. A track-by-track analysis to determine what’s-been-issued-where-before would take some time, but at first glance, suffice to say that if you own all of the original (in other words no-bonus-tracks) albums, this is the perfect companion. If you have the various CD reissues and Vintage, you’ll face a lot of musical redundancy here. That said, there’s no mistaking the high quality of this music. Plenty of rock bands would kill to have this much stellar outtake material.

The “live” 1968 recordings from Vintage reappear here. While there’s little doubt Moby Grape was a strong live band (as evidenced on any number of bootleg recordings), these tunes sound suspiciously like studio takes with audience overdubs. Though, it’s important to note that this has never been substantiated. A high-quality recording does exist of the group’s show-stopping performance at Monterey Pop Festival; it’s a shame that couldn’t be licensed for inclusion here; it remains officially unreleased.

Verdict: If you don’t have all the other albums, and you appreciate the sounds of this criminally-underrated group — one that fused the best elements of rock, blues, country and more — then The Place and the Time is a worthwhile purchase. And if Katz’s past actions are any indication at all, buy it quickly before he finds a reason to have it pulled from release.