I nearly passed this one by. The cover turned me off, and as I’ve mentioned before, with so many CDs for potential review, an off-putting cover image can sometimes be enough to cause me to just move on. Guy with a hat? Check. Acoustic guitar in hand? Check. Female cover model who I find, well,
Read More
I have a friend who possesses a much wider range of musical interest than my own. Unlike me, she rarely concerns herself with such trifling issues as what genre best describes a particular act. And because – at least I tell myself this is why – she doesn’t spend the better part of her free
Read More
If you want a potted history – albeit one from a provocative perspective, and with its own axe to grind – of Wanda Jackson‘s career, I recommend you put your hands on Nick Tosches‘ Unsung Heroes of Rock’n’Roll: The Birth of Rock in the Wild Years Before Elvis. But for the music itself, your go-to
Read More
Here’s another installment in my occasional series of capsule reviews, this time covering new releases by indie/self-released artists. My self-imposed limit for this particular exercise is 150 words on each album. War Poets – Dulce et Decorum Est Every so often an act comes along that is – or at least seems to be –
Read More
Owing to the distractions of the holiday season, today’s scheduled blog entry isn’t quite ready. So while I finish it, I invite you to celebrate the 70th birthday of acclaimed songwriter / arranger / producer Van Dyke Parks by reading a pair of interviews I did with him. (Parks, of course, is perhaps most well-known
Read More
The 45rpm vinyl format isn’t dead. In fact, I see more of those little seven-inchers in my mailbox these days than I did even a couple of years ago. Here I take a look at four recent submissions. None is at all musically like the others, and seven out of the eight songs are highly
Read More 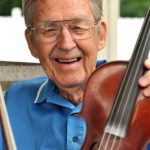 Some stories write themselves. Oftentimes a writer does some research, interviews the subject, and then weaves the resulting information into a narrative. But when the subject is Asheville, North Carolina fiddler Paul Crouch, it’s best to get out of the way and let the 82-year-old Crouch tell it himself. “The first thing I remember about
Read More
Asheville-based blues troubadour Leigh Glass put the first lineup of her band together in 2003, but her own musical history goes back much farther. “I took piano lessons when I was little…but it didn’t stick,” she laughs. With deep roots in Western North Carolina — her family is from Bethel (Cold Mountain) in Haywood County
Read More
Reviewing best-ofs is a dodgy proposition; if the artist in question is good, then by definition the disc is good…generally. It’s simple enough to point out a shoddy compilation, taking issue with any number of issues (song selection, poor remastering, lack of bonus/rarities, clumsy sequencing, lousy packaging, etc.). With all that in mind, then, how
Read More
Hayseed Dixie is bluegrass music’s answer to Dread Zeppelin. But then, who asked the question? Hayseed Dixie’s high-concept approach recasts hard rock songs in a bluegrass context (for a secret message, say “Hayseed Dixie” out loud, over and over, until you get it). These guys most certainly have a sense of humor — how else
Read More