Led by the duo of Sparrow and Keith Smith, Asheville-based band Resonant Rogues combines flavors of Appalachian old-time, early jazz, and Eastern European folk to create a distinctive and original sound. The group’s latest album, Hands in the Dirt uses that sound as a backdrop to lyrics that focus on universal – and sometimes very topical – themes. Resonant Rogues celebrated the album release with a live show at Isis Music Hall in Asheville on May 6.

Among other influences, the songs that Sparrow and Keith write for Resonant Rogues are informed by jazz manouche, a prewar style most often associated with guitarist Django Reinhardt. But Keith recognizes a commonality between that style and Appalachian music, as well as music from the Baltic region of Europe. “It’s all folk music,” he explains. “It’s all music that people play together like families. It gets passed on; it’s not academic music.” 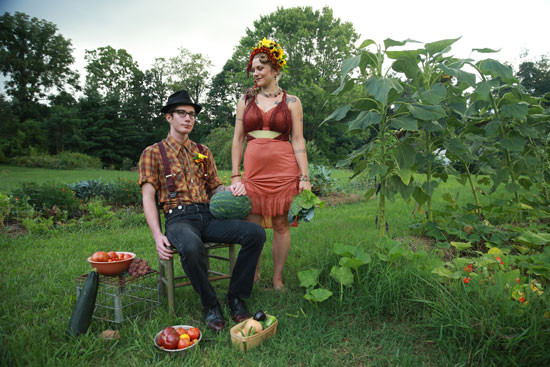 Sparrow took notice of a resurgence in the popularity of older forms of music; those styles seeped into her psyche as she wrote new and original songs. “And now I think we’re seeing more of a resurgence of the earlier styles,” she says. “the places where jazz really intersects with other styles of Americana like country and western swing.”

The latter was originally designed for dancing. “Dancing is a pretty big part” of the current jazz/Americana renaissance, Keith believes. “And we’re a part of that: we both teach swing dance, and we go to the local dances wherever we are.” They often perform at those dances, too. “It’s a good scene that keeps that music alive,” he says.”

Resonant Rogues’ music is an exuberant combination of planning and spontaneity. “We work out arrangements with our band members,” Keith says. “But the solo sections that happen instrumentally are improvised.” Sparrow adds that songs like “Trevor Bought a House” off of Hands in the Dirt “has the ‘official’ parts, but then it’s got solo sections built in.” Sparrow and Keith each compose songs individually – one can usually tell who wrote a song simply by who’s singing it – but they work on the arrangements together, and with their support musicians.

Like many musicians, both Sparrow and Keith are involved in multiple projects. Sparrow also leads a group called Sparrow and Her Wingmen, which draws from some of the same influences that color Resonant Rogues’ music. But she sees a sharp distinction between the two. “Sparrow and Her Wingmen is specifically focused on vintage jazz,” she explains. “Resonant Rogues plays some vintage jazz tunes – that’s part of our influence – but it’s not the focus of the band. Our focus is on original music.”

Resonant Rogues is a showcase for the musicians’ collective and individual instrumental skills, but the song lyrics are a key component of the group’s appeal. One of the most moving tunes on Hands in the Dirt is its final track, “Can’t Come In.” The song presents an imagined dialogue between a refugee and a gatekeeper who explains that “we have only just enough for all our kin.”

Like several of the tunes on the album, “Can’t Come In” was written during the band’s recent tour of Europe. “We took a tour from Istanbul to Ireland,” Sparrow recalls. “A long trip.” Adding an extra layer of poignancy, one verse of “Can’t Come In” was written and sung by Basher Balleh, a Syrian refugee currently living in Istanbul. Lyrically and musically, the song represents Resonant Rogues’ successful synthesis of folk styles from across the globe into something unique and personal.

Resonant Rogues aren’t afraid to include a direct message within the lyrics of “Can’t Come In.” Explicitly referencing Emma Lazarus’ 1883 sonnet “The New Colossus” with its mention of tired, hungry and poor as well as the core message of Jesus’ Sermon on the Mount (“Do unto others…”), “Can’t Come In” celebrates the welcome home that folk music – whatever its origin – provides for social conscience. The song’s final verse changes the refrain to the more hopeful “welcome in / we have just more than enough for all our kin.” As with all of the songs on Hands in the Dirt, listeners can appreciate the lyrical content, but they can – and should – dance along as well.