In his native Swannanoa, N.C., Finn Magill may be thought of as a vastly accomplished musician in the idiom of traditional Irish music. But his interests and musical explorations have long taken him far beyond that style. He recorded an album of Malawian flavored music, Mau a Malawi, and he leads a traditional Brazilian quartet in Rio de Janeiro, where he lives part-time. The multifarious musician returned to his Asheville-area hometown for an April 11 show at the Grey Eagle, where he was joined by Scottish traditional musician Paul McKenna.

Growing up against the backdrop of the annual folk arts workshops at the Swannanoa Gathering, Magill absorbed the musical influences of his parents. “Part of it was just chance, because that was the music that I grew up hearing,” he says. “Both of my parents play traditional Irish music.” Even though he was exposed to many other styles, it was Irish music that first resonated with him. “Even when I started learning the fiddle at age 10, I never practiced the classical stuff,” he admits. “I just wanted to play Irish music.” 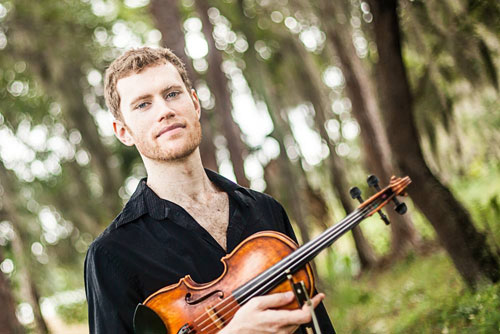 He got the travel bug, too. “Because my Dad was always so involved in traditional Irish music, he’d bring over these musicians; I’d hear all these Irish accents growing up.” He viewed Ireland and its culture as a “grand mystery. So of course when I went to Ireland, it was life-changing.”

By 16 Magill had twice made it to the finals in the All-Ireland fiddle championships. Yet at the same time, his keen musical interests widened. He has since spent extensive time in New York City, Africa, and Rio, among other locales. “Pretty much all of my travels have been motivated by a kind of musical tourism,” he says. “I’ve always been fascinated in music and travel, so it makes sense to combine the two when I can.”

After living in New York City for awhile, Magill decided to visit Brazil “to study Portuguese and escape the New York winter,” he says. “Once I got down there, I discovered all this amazing Brazilian music.” He discovered the traditional Brazilian music known as choro, a genre that – somewhat surprisingly – bears more similarity to Irish “trad” music than to the more well-known Brazilian samba.

“When I got into choro and started going to sessions, it kind of reminded me of Irish trad,” Magill recalls. “It’s essentially instrumental. You sit in a circle and people trade tunes; that’s exactly what you do both in choro and in Irish traditional music.” While Magill is open to many styles of music, something about choro immediately struck him. “When I was in West Africa, I’d be listening to polyrhythms and think, ‘What the hell is going on?’ Initially, I just couldn’t get it,” he says. “But with choro, I thought, ‘Yeah, I get this. Even if I can’t play it, I kind of know how it works.”

But he soon mastered the style, and assembled his own group to play it. “The cool thing about choro is that it absorbs all the Brazilian musical traditions,” Magill says. “Because it’s been around so long, it has spread throughout the entire country. And wherever it went, it absorbed some of the local influences.”

The same can be said of Magill himself: his music draws from his immersion in Appalachian, Irish, West African and Brazilian music. He recently released a pair of albums, Roots and Branches, both of which were recorded primarily in Chris Rosser’s Hollow Reed Studio in Asheville. Roots focuses on Irish trad, while Branches extends in myriad other directions. “The real traditional guys don’t even believe in accompaniment,” Magill says. “Irish trad isn’t chordally-based; it’s just straight melody.”

Drawing on the nexus of Magill’s and McKenna’s strengths, the Asheville focused on more traditional material. Magill explains Irish trad’s melodic underpinning. “If you’re going to learn this music, you have to really train your ear,” he says. “You have to pay attention to the minute differences in melody. In some other genres of music I enjoy – like swing – I may not know the tune, but I can hear the chord patterns and strum along. But that wouldn’t fly in Irish music,” he says. “If you didn’t know the melody, you would just not play.”