Despite a solid foundation in bluegrass and old-time music, the Jon Stickley Trio has never allowed itself to be boxed in by the confines of mountain music. On its latest EP, 2016’s Triangular, its upcoming album and especially live onstage, the Asheville-based trio uses bluegrass ans a jumping-off point for its lively musical excursions. The Jon Stickley Trio previewed Maybe Believe with a special hometown pre-release celebration at the Grey Eagle in Asheville NC on March 10.

“I do come out of the bluegrass background,” admits flatpicking guitarist Stickley. But he says that as he and bandmates Lyndsay Pruett and drummer Patrick Armitage began developing their own music, the trio’s musical personality began to emerge. That personality draws from musical traditions well outside Appalachia. Armitage studied under Dave King of avant garde group The Bad Plus, and has a strong background in hip-hop. “Lyndsey is classically trained, and also plays jazz,” Stickley notes. 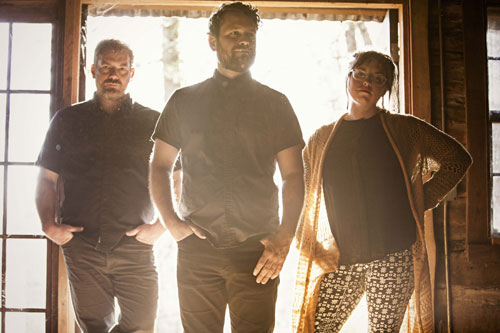 But the trio displays a healthy respect for tradition, too. “One thing we really try to do is honor the fundamentals that are so important to old time and bluegrass music: the timing, the tones, the hard-driving rhythms,” says Stickley. Despite the adventurousness of the trio’s arrangements, Stickley says that he still often feels the he’s “playing music that could be done around the campfire with a couple of other people who know the songs.”

Live onstage and in the studio, the trio aims to be “clear and present, like you would at a bluegrass jam,” Stickley says. If there’s a guiding principle to creating original music for the trio, Stickley suggests it might be something like this: “We try to stick to the parameters of what is right,” from a music theory standpoint, “and then apply it to our own original songs.”

One of the many characteristics that sets Jon Stickley Trio apart from many of its contemporaries is the emphasis on instrumentals. “That was something that took shape over time,” Stickley says, noting that both he and Pruett do sing.”In the beginning we [did] about 30% vocal material, but we were writing so much original instrumental material that we were gravitating toward that.” It wasn’t until the JST started working with producer King on 2015’s Lost at Last that the group fully embraced an instrumental approach.

“We wanted to add a couple more vocal tunes to the three that we planned on recording,” recalls Stickley. “But Dave dropped a bomb on us.” King convince Stickley and his band mates that their instrumentals were a big part of what made them special. “The vocal stuff was good,” Stickley says, “But it didn’t have the same power and integrity as the instrumental stuff we were writing.” They took their producer’s advice, and went on to play several festival sets without any vocals. “It felt so natural that we just ran with it,” Stickley says.

The trio continues that approach on its newest album. Maybe Believe was scheduled for release on May 13, though advance copies were available at the JST’s Grey Eagle show on March 10. Maybe Believe showcases uptempo numbers alongside what Stickley describes as “mellow, soundscape-y kind of chill tracks.”

And while the new album displays the trio’s skill at evoking a wide array of emotions through original material, the band often tosses an irreverent cover tune or two into its live set. Asked if the inclusion of Nirvana’s “Smells Like Teen Spirit” in the trio’s set is some kind of musical statement about the irrelevance of genre classification, Stickley laughs. “It’s not to make any point at all, other than that you should have fun,” he says.

The idea to cover a 1990s grunge tune came to Stickley one day when he was trying to write a song. “We needed material, so I started thinking: ‘What influences in my life – other than bluegrass picking – can I bring to the table?’” He sought to apply what he calls his “bluegrass mileage” to other kinds of music he loves. “We did ‘Teen Spirit’ at a random bar gig one time – adding it on to “Blackberry Blossom,’ a traditional fiddle tune – and it was so funny that we thought, ‘Well, we should probably keep doing that!’”

Whether it’s a left-field reinvention of a rock classic or an original composition, the Jon Stickley Trio excels at musical interplay; their live approach might be described as controlled improv. “There’s a lot of improvisation, “Stickley concedes, “but within a very defined structure of a tune.” He says that all three players always know what – in a general sense – is coming next. “We’re very conscious of who’s following whom, and who’s playing the melody. We’re always trying to figure out how to diversify and make [music] that’s as interesting as possible with just three people.”