The Motel Shot that finally saw release would consist almost completely of material from the studio sessions. On release, it fared well, reaching #65 on Billboard‘s album chart. A surprise hit single, “Never Ending Song of Love” rose to #13 on the singles charts. Even in its more refined state, Motel Shot captured the homespun ambiance that was central to Delaney & Bonnie’s music. “What you have on this album is just a very organic group of people sitting around playing,” Thomas says.

He reflects on the appeal of the duo’s style, describing it as “great American rootsy rock ‘n’ roll music: adapting gospel songs and old folk songs, and modernizing them.” Those qualities are what originally attracted their high-profile admirers. “There’s a reason Clapton heard them and broke up Cream. He wanted to do more rootsy stuff. There’s a reason why – as the Beatles were disintegrating – George Harrison sat in with them. This,” Thomas says, “is the real Americana.”

Delaney & Bonnie would only make one more album together, 1972’s D&B Together; that record received poor reviews and didn’t sell well; by the time of its making the couple’s marriage was on the rocks, and they divorced soon thereafter. Delaney went on to record and release seven more albums as a solo artist; he also played and sang on sessions for Clapton, Commander Cody, Jerry Lee Lewis and many others. He died in 2008, and was posthumously inducted into the Mississippi Musicians Hall of Fame in 2011. Bonnie Bramlett went on to release eight or more albums of new material as a solo artist. Her acting career included small film roles and a recurring role on the TV series Roseanne. 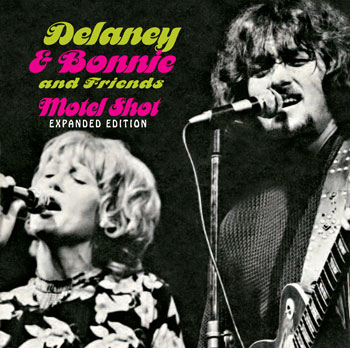 Interest in Delaney & Bonnie’s work would endure; a 1990 best-of CD has remained in print for more than 25 years; it features three cuts off Motel Shot. In 2010, Rhino Records released a 4CD box set documenting the entire concert from which On Tour with Eric Clapton was sourced, including three CDs worth of additional live recordings from that tour. The latter three feature George Harrison on guitar.

In the wake of the success of that expanded On Tour with Eric Clapton release, one of the people closely associated with the project approached Pat Thomas. Fellow archivist Mason Williams (not the guitarist of the same name) told him there remained a cache of unreleased Delaney & Bonnie material. Thomas got in touch with engineer/producer Bill Inglot, who began research on the original living room session tapes for Motel Shot. “Bill is a fan,” says Thomas, “so he and I tag-teamed listening to this unreleased material and picking the tracks.”

The results of their efforts is Motel Shot: Expanded Edition, released by Real Gone Music on February 3. The new edition features the original album in its entirety, plus eight bonus tracks from the earlier, Botnick-engineered sessions. The ’71 LP featured twelve cuts, more than half of which were traditional gospel songs (“Where the Soul Never Dies,” “Will the Circle Be Unbroken,” Rock of Ages,” etc.) or standards (blues pioneer Robert Johnson’s “Come On in My Kitchen,” a cover of “Faded Love,” the 1950 Western swing tune by Bob Wills & His Texas Playboys). The remaining tracks – including “Never Ending Song of Love” – are original compositions by Delaney Bramlett.

The eight “new” tracks include an original blues (unimaginatively titled “Blues”), three early takes of songs later re-recorded during the studio sessions, a couple more standards, and an acoustic reading of the Delaney Bramlett-Mac Davis original, “Gift of Love.” The latter song had appeared in an electric arrangement on Accept No Substitute. On Motel Shot: Expanded Edition, it’s a spare arrangement built around acoustic slide guitar and the vocal harmonies of Delaney & Bonnie.

Another bonus track of note is “I’ve Told You for the Last Time.” Eric Clapton had recorded the song – written by Delaney, Bonnie and Booker T & the MG’s guitarist Steve Cropper – for his own self-titled debut, released in August 1970. The acoustic version on Motel Shot brings out the song’s gospel roots. 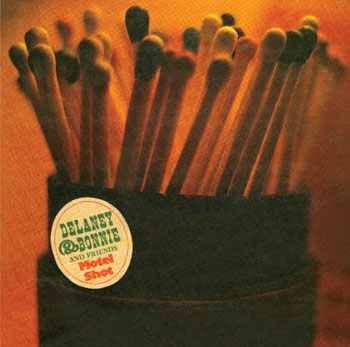 The expanded reissue of Motel Shot probably ends the search of Atco’s vaults for unreleased Delaney & Bonnie material. Thomas and co-producer/curator Inglot selected the best from the previously-unheard living room sessions. “There was a version of ‘Amazing Grace’ that Bill thought was a little inferior,” Thomas says. “And we didn’t want to completely duplicate the original album’s track listing, so we mostly went for bonus songs that weren’t on the original LP.”

Pat Thomas’ liner note essay for the new CD includes lively and illuminating quotes from Elektra’s Jac Holtzman, engineer Bruce Botnick, keyboardist Bobby Whitlock, and Bonnie Bramlett. The original LP artwork, including lyrics sheet and an alternate cover (see above), is also included in the booklet that accompanies the CD.

Thomas makes an important observation about Delaney & Bonnie’s place in music history. “Clapton and Harrison heard their music, and it turned them around. If you were to do one of those old-style Pete Frame Rock Family Trees,” he says, “they’d be right at the root of a big one.” He describes Delaney & Bonnie and Friends as the “godfathers and mothers” of the musical collective and scene that would spawn Joe Cocker’s Mad Dogs & Englishmen. “Dave Mason hung out with these guys, and then some of the ‘and Friends’ became Eric Clapton’s back-up band: bassist Carl Radle, Bobby Whitlock, Jim Gordon … and then of course many of them went on to Derek & the Dominos. It was a very creative and tumultuous time.”