Ask most people who the leader of Jethro Tull was, and they say, “Why, Mr. Tull, of course!” No, that’s Ian Anderson you’re thinking of. But the mainstay of that group alongside the flutist/singer was ace guitarist Martin Barre. On all but the first of the band’s twenty-plus albums, it’s Barre’s fretwork that you’ll hear. With the disbanding of Jethro Tull in 2013, Barre has focused more intently on his solo career. But a Martin Barre solo tour isn’t one of those “older guy with an acoustic” shows where you get quiet readings of the back catalog. No, Barre is a fiery guitarist in a blues-rock mode, and he’s touring with a full band. He plays Asheville’s Grey Eagle on Thursday, December 3. [Buy tickets here.] 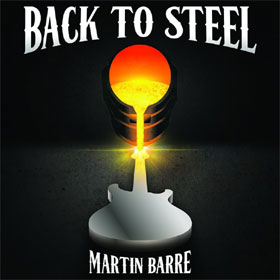 The concert will feature tunes from Barre’s new album, Back in Steel, alongside select re-imagined classics from the Jethro Tull songbook. Back to Steel includes a new reading of “Skating Away (on the Thin Ice of a New Day),” a tune that originally appeared on Jethro Tull’s 1974 War Child LP. Barre’s arrangement strikes a balance between remaining faithful to the Tull version and offering up something new. And on his current concert tour, Barre leads his band through some other reinvented songs from his Jethro Tull years. “I’m looking for a song that I can do something with,” he says. “And very often it’s a song that didn’t [originally] have lots of guitar in it. That gives me a sort of whole different place to go. And these really work live; they have a lot of energy.” The band’s set sometimes includes new versions of “Sweet Dream” (from 1978’s Bursting Out), and two tunes from 1969’s Stand Up, Jethro Tull’s second album (and the first to feature Barre on guitar), “New Day Yesterday” and “Fat Man.” Barre characterizes his arrangement of that last title as “quite rock ‘n’ roll.” 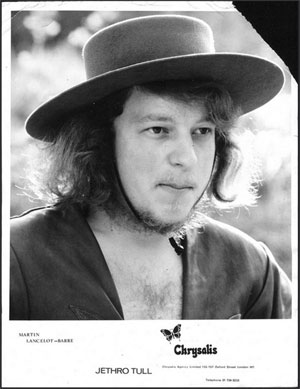 Barre began his professional career as a musician in the mid-to-late 1960s (he recorded some early sides with a then-unknown Elton John), and joined Jethro Tull in 1968. But it wasn’t until the early 1990s that he began recording and releasing solo albums; with the regular schedule of Tull album releases and world tours, there simply wasn’t time to focus on a solo career. In more recent years, Ian Anderson has wound down activities for his band, and in the 21st century, Barre is busy with that long-delayed solo career. “I never really had the time for it in the days with Tull; the schedule was so punishing; really full-on. If we ever got a few weeks off anywhere, I just wanted to relax.” Only in the 1980s did Barre begin writing music. Back to Steel is his seventh solo album. And even now, he says, “I still feel very much like I haven’t peaked. I have a lot more to go, and I’m going to get better and better.”

“I love writing,” Barre says. “It’s a fresh, energetic process for me. Many artists of my era get a bit tired – more mentally than physically – so I’m quite glad that it all sort of happened later on for me. It’s all accelerated in the last three, four years.”

It’s not as if Barre was starting from scratch. Even though most all Jethro Tull tracks bear the songwriting credit of Ian Anderson, Barre had a substantial hand in song arrangements. Anderson often brought songs to the band in “very, very basic form,” Barre says. “And the great thing about Tull is that it was a band working together; it always was. I always get asked about credit, and I say that while one guy might have written the words and the chords, that’s the tip of the iceberg.”

Barre says that while he’s always enjoyed the method of “working a song beginning to end, having a big picture idea of what [I] want,” he uses a similarly collaborative band approach today in his solo career.

“I don’t give many guidelines,” Barre says. “The other guys will have got a pretty good idea of what [the song’s] about. But then, it’s down to them. And very rarely will I say, ‘try this other bit instead.’ They really have a very nice way of working with me. And ninety-nine percent of the time, I like what they do. That’s why they’re in the band: because they’re musicians who think like me.” 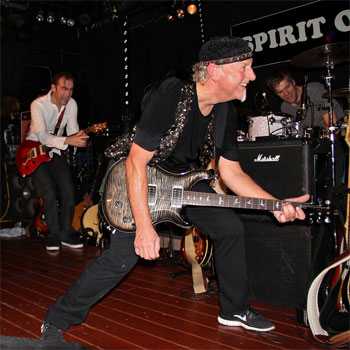 Martin Barre’s guitar style is informed by the music he loves, but “I don’t use the word influences,” he says. “I’m not being awkward or snobby, but I listen to a lot of music – whatever the instrument is; doesn’t have to be guitar – and I get inspiration from riffs in music. Particularly classical music; I love orchestration.” Still, he will admit to admiring the work of some well-known guitarists: Mark Knopfler, Robben Ford, Scott Henderson, Gary Moore, Stevie Ray Vaughan; people who have “emotion in their playing,” Barre says. “And I hope that’s what I’m like.”

Barre contrasts those names with “guys who have got crazy technique. I can listen to that stuff for maybe five minutes, and I’m not really happy. I’m looking for a lot more; I’m not impressed by pyrotechnics. The greatest melody in the world,” he says, “is one that people [can] hum. It might be an ABBA song, it might be a Beatles song.”

Speaking of the Beatles, Back to Steel features a radically reinvented version of “Eleanor Rigby,” a song that originally appeared on the group’s 1966 Revolver LP. Barre says that he wrote his own rock arrangement some fifteen years ago. “I originally wrote it as an instrumental. You know, Jeff Beck does some pretty cool things with classic songs, and though [‘Eleanor Rigby’] is nothing like that, I thought it would be a bit of fun.” He recalls, “I was in the studio one day with nothing in particular to do, so I started messing around with it. I recorded it as a demo – changing the chords and melody – and then I sat on it for years. And then last year I thought I could do something with it. It’s a great song, and I hope I left enough of it to preserve what it is, while still bringing something new to the table that makes it a bit fresher.”

As far as music that’s complicated for its own sake, Barre observes, “I think the fans of that music are other musicians. When I watch tennis, I love the guy who’s got a beautiful backhand. It’s an art in itself. And I just love the beauty in things.” He chuckles, and notes, “Maybe I’m sounding a bit pompous. But beauty really is in the eye (and ear) of the beholder. And I really like things that make me smile.” 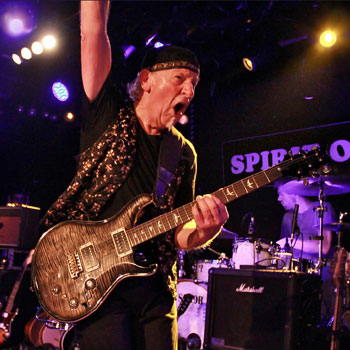 One of the tracks on Back to Steel in which Barre combines technique with emotion-filled, expressive playing is “Hammer.” And fans of Jethro Tull might note just how little it sounds like anything in the Tull catalog. Barre laughs when I ask if he consciously seeks to create music that doesn’t sound at all like his old band. “I’m never that aware,” he says. “I never give myself an agenda. Because that narrows the field, and I like to be really open-minded. I go where the music takes me.”

“I don’t have any hangups about Tull,” Barre says. “In the later years, I had less and less to do with it. I was quite a frustrated musician in many ways, though I didn’t realize it until I started my own band. It was only then I realized how little guitar playing was going onto Tull albums.” The freedom to open up on guitar a bit is something Barre relishes. “I’m really happy [now]; I love lots and lots of guitar.”

Still, Barre has fond memories of the music and working relationships he enjoyed in his nearly 45 years in Jethro Tull. “Now that Tull’s finished, it’s my intention that none of those guys ever get forgotten. As far as I can help it, their names should be kept in the foremost of everybody’s minds. They all had a really vital role to play.” Barre credits archivist Martin Webb with doing a good job on that score; Webb oversees the current Jethro Tull reissue series, packages that include bonus tracks, essays, and remixes by Steven Wilson. Barre does quip that the people at the reissue label “don’t even have my phone number. The first time I see any of the reissues is when someone hands me one to sign!”

Touring and fronting his own band is a different experience than the one Barre had as a member of Jethro Tull. “When we’re onstage, I love it,” he says. “But we’re in the stage where there’s a lot more ‘admin’ than music. Maybe next year, as things move on, I’ll get more help in that. I like travel, and I’m a pretty good travel agent myself, but it’s a lot of work. A lot of days, I’m at my computer, and then at the end of the day – over a glass of wine – I’ll think, ‘You know what? I haven’t picked up a guitar today!’ And that’s a really important part of my life. If I’ve got an hour, I want to play every day. Every day.” But he’s not complaining about the non-musical chores: “I’m really pumped about everything that’s going on.”

Barre is especially enthused about bringing his tour to America. “How great is that?” he asks. “We’ve got a lot of fans here that I really want to get to know again. And I’ve got a lot for them.” He has family here, too: his wife is from Mississippi, so he has relatives in Tupelo and Jackson. “I love America,” he says. “America is as much in me as is anywhere else. Since 1969, it’s been my life blood. Nearly everything that’s ever happened to me has happened in America, so I have a lot of respect for it.”

The guitarist does acknowledge the challenges of mounting a tour in such a large country. Comparing America to Europe, he says that touring here is “like tackling three or four countries.”

Barre characterizes what concertgoers at his December 3 show in Asheville [buy tickets here] can expect. “It’s high energy; we have a great time, and the audience will have a good time, too. Simple as that. I’m confident that people won’t know what they’re about to hear, but at the end of the night, they’ll be really happy. It’s rock, it’s blues, it’s full-on. And it’s fun.”