Once Anton Barbeau realized that the new album wouldn’t be a Three Minute Tease project, he “started looking around for other ways of doing it. I was back in Sacramento, and I had always had musician friends there. So I called some of them up. And,” he added, “that’s normal for me. Any record I make, I’m always going to call up some of the same people. I had Larry Tagg [Bougeois Tagg, Todd Rundgren] play on some tracks; he was in my band for years. It’s an absolute pleasure just to sit in the room when he’s playing.” 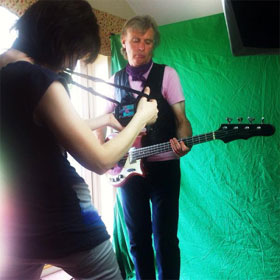 Barbeau connected with another of his heroes. “I’m friends with Colin Moulding‘s daughter-in-law,” he explained. “Colin said yes! I got Colin Moulding of XTC on my record, and it was freaking me out!”

[At right: Colin Moulding (ex-XTC) miming for a video to promote one of the songs on Anton Barbeau’s upcoming Magic Act]

And Barbeau reached out again to Andy Metcalfe. “I said to him, ‘I know we’re not in a band any more, but would you want to play on this record?’” and the bassist agreed.

Reportedly, Metcalfe – a longtime XTC fan – was excited at the prospect of being on an album with Moulding. Barbeau recalled a conversation with Metcalfe years earlier, in which the bassist expressed his admiration for Moulding and his work. “I remember thinking, ‘I’m sitting here with one of my favorite bass players on Earth, and we’re discussing another of my favorite bass players on Earth!’”

“The whole story really is convoluted,” Barbeau laughed. “And I’m still trying to turn it into a press release for the new record!” Bassist Martin Gordon of Sparks also lives in Berlin, and lent his talents to the Magic Act sessions. “So it’s kind of a bass player’s dream record,” Barbeau gushed. The sessions also included Windsor (“on most of the record”) and drummer Michael Urbano on several tracks. The Corner Laughers‘ Karla Kane also laid down some tracks for the project. “She’s all over the record,” Barbeau said. (Note: if I’ve missed anyone, the fault for omission is mine, not Anton Barbeau’s. – bk)

“One of the things about this record,” Barbeau said, “is that it’s really a cut-and-paste thing. Files being emailed; it’s a glued-together album. You always want the fantasy that everybody’s in the room together, but in this case, there’s no way to deny that Magic Act is simply not that kind of record.” He said that the chosen method is “how the record was meant to come together. And it works.”

Things sometimes happened backwards: “Colin emailed me his bass track,” Anton recalled.” Then I met him. Then we did a video.” The Three Minute Tease track on the upcoming disc was done the old-fashioned way. “It was an example of us at our absolute best, in a room together,” Barbeau stressed. “That was the key to our chemistry; we were a sort of piano jazz trio, in a way.” After completing a “live” basic track, Barbeau went back and overdubbed what he described as “buckets of nonsense” on top of the recording.

I asked Barbeau – on this August morning when we were chatting over coffee – if the record was done, if it was “in the can.” He demurred. “It’s almost, almost, almost done,” he told me. He had already sorted out an agreement to release the upcoming Magic Act on vinyl in Spain in December 2015. “Everyone loves vinyl,” Barbeau said, “but this album is really the right one for that.” Even though he has a large body of work, Barbeau characterized Magic Act as a good place for those new to his music to begin, “a really fine intro to what I do.” And, he added, “It’s good for people who like what I do already.” He described the album’s nature: “Here’s some pop songs. Here’s some murky nonsense.”

Magic Act will come out in the USA on the Mystery Lawn label, Allen Clapp‘s California-based indie imprint that’s home to a consistently high caliber of pop-leaning acts. 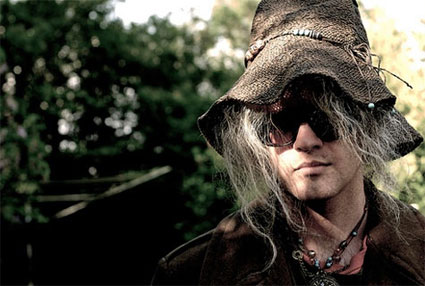 At this point in our conversation, Anton excused himself to take a break and check on the status of his crowd funding campaign, due to end within the hour. When he returned, I asked him how things were going. He replied, “I almost don’t want to talk about it…” He paused to refresh his laptop’s screen, and we all saw that the campaign was at 90% of its funding goal. His mood brightened immediately. “I’m in a much better mood, suddenly,” he laughed. “I loooove crowd funding; it’s one of my favorite things to do!”

“Everyone says that you’ve got to be positive with these things,” he said. “I get that; I really do. And with this campaign, I’ve not been particularly pissy about it.” The campaign did endure a few hiccups regarding credit card transactions, likely owing to the fact that the funding platform/website has experience mainly with European acts, while many of the potential contributors are in the United States. But everything seemed to be working okay in the end.

Barbeau outlined the goals of the campaign. “In this case, we’re covering a lot. Thankfully, it’s not that pricey for me to make records, if I’m stealthy about it; I do a lot of the work at home.” But studio costs and musician fees do add up. And then there’s mastering, and the manufacture of the physical discs themselves. “And it all depends on how well we do here in the exactly one hour remaining,” Barbeau grimaced somewhat nervously.

Meanwhile, Anton Barbeau is already giving thought to what’s next. As always, his plans include live performance. “I’m always playing,” he said. “I very rarely have done the ‘right’ thing, where when you’ve got a new record, you play material from that record, push that material.” He’s more likely to say, “Okay, let’s do one song from it.”

“When I did the record with The Bevis Frond, the band that I had back home just loved it,” said Barbeau. “Because they could sound like the record! So we sounded like that: two guitars, bass, and drums. But now I’m more likely to pick a song from each record.” 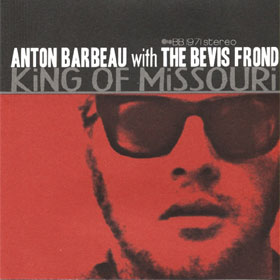 He also discussed his then-upcoming plans to visit California for a handful of live dates; his plans also included work on the next Allyson Seconds album, a followup to Bag of Kittens, the 2009 album he produced; that earlier album featured all songs composed by Barbeau. A tour of Spain – to support the vinyl release of Magic Act – is tentatively scheduled for early 2016. “Spain is a country that really seems to love psychedelic music, powerpop; all the genres that I have anything to do with, that’s the country that really seems to ‘get’ it,” he said.”

Speaking of powerpop, Barbeau explained his on-again, off-again relationship with the genre. “When I got more interested in psychedelic music, I really sort of pushed the powerpop thing away. But I realized, I still love pop songs. Maybe the powerpop scene, as a thing, is almost too ‘clean’ for me, but playing in Spain, as I mentioned, and seeing their support for the pop end of things, reminded me of how much I do love pop music.”