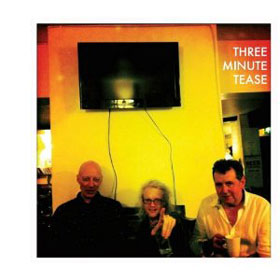 Rock fans who count themselves among the in-the-know crowd recognize the names Morris Windsor and Andy Metcalfe. The pair (on drums and bass respectively) first gained notice as members of The Soft Boys, that underrated, under-appreciated psych-revival band from Cambridge. Led by Robyn Hitchcock and rounded out by the great guitar work of Kimberley Rew (later of Katrina and the Waves), The Soft Boys created music that was simultaneously innovative, forward-looking and rooted in the psychedelic sounds of (among others) Pink Floyd‘s Syd Barrett.

While The Soft Boys never caught on in a commercial way and would disband, Hitchcock turned again to the Windsor/Metcalfe rhythm section when he formed another band, The Egyptians. The pair’s sympathetic signature sound provided just the right atmosphere for Hitchcock’s singular songwriting. In particular, Metcalfe’s fretless bass work added a distinctive personality to the music.

Meanwhile – well, beginning in the 1990s – an artist with a similar (but by no means identical to Hitchcock’s) musical sensibility began his recording career in California. Like Robyn Hitchcock, Anton Barbeau‘s music has always straddled the space between cracked psych-folk and powerpop, making him a kindred spirit with artists such as Nick Salomon (The Bevis Frond), Julian Cope and Martin Newell (Cleaners From Venus). True, few of those names will register in the minds of the casual rock fan, but among those who dig deeper into music — especially the psych-revival kind — those names command respect.

When Jordan Oakes put together the fourth and final volume in his landmark Yellow Pills compilation series, he included Barbeau’s “Octagon.” Typical of the series’ high standards, the song was catchy and solid. But the production leaned pretty far in a demo direction, rendering it slightly less wonderful than it would otherwise be, and causing it to stand out on the compilation for the wrong reasons. (Barbeau would re-cut “Octagon” not long thereafter, working with – as it happens – The Bevis Frond. That vastly superior version is now available on a highly entertaining Barbeau career retrospective of sorts called Empire of Potential: 18 Golden and Completely Obscure Hits. Never let it be said that Barbeau hasn’t got a finely-tuned sense of self-effacing humor. Oh, and go buy Empire of Potential.) Over the last two decades, the prolific Barbeau has issued on average an album a year, under his own name or with others.

Which, as it happens, brings us to the present-day confluence of these two sets of musical history. 2012 sees the release of a new self-titled album from Three Minute Tease, a trio comprising Anton Barbeau (vocals, guitars, keyboards) plus Windsor and Metcalfe. And hearing the resulting music may cause listeners to wonder why this collaboration hasn’t occurred before.

The rhythm section sound like themselves, yes: in particular, Metcalfe’s blobbing bass lines (which sometimes sound a bit like Moog bass) acts as much as a melodic device as they do part of the rhythmic foundation of the music. But the songwriting – ten Barbeau originals – is strictly Anton Barbeau. The pairing is is natural and organic throughout the album. “Love is Onion” is anchored by a bass line straight out of Revolver, but the tasty analog (or analog-sounding) synth lines give it a more timeless feel. And Barbeau’s overdubbed vocal harmonies – a hallmark of his music – up the hook factor.

Windsor’s clattering drums provide an intriguing counterpoint to the moody acoustic vibe of “Milko II,” and Metcalfe’s fretless only increases the song’s lovely, melancholy ambience. The nervy “Thanks for Lifting My Leg” is manic in a way that recalls Robyn Hitchcock’s “The Yip Song.” And Barbeau’s snaky lead guitar figure is irresistible. For “Dust Beneath My Wings” the trio serves up a more intimate, unadorned arrangement, and in doing so they showcase the fact that Three Minute Tease is an album full of varied texture, but one that hangs together nicely. Some tasty cello work adds yet another level of interest.

With a song title like “My Potato,” it’s a safe bet that things are taking a turn toward Hitchcock-style impressionistic lyrical concerns. But Barbeau’s not aping anyone; he’s his own man. Echoey piano is the centerpiece of “These Alien Angels,” and once again, Metcalfe’s fretless bass – here used as a melodic counterpoint providing fill licks – is nothing short of inspired.

I’m a sucker for anything with Mellotron on it, and the vocal chorus ‘Tron work on “Sensual Pleasure of Pie” is delightful. Three, sometimes four melody lines all unwind at once on this multilayered tune. “Dig My Bones” focuses on Barbeau’s slightly idiosyncratic vocal delivery; his singing is perhaps an acquired taste, but said taste is well worth acquiring. The stately “Up On the Moon” is the slowest track on Three Minute Tease, but it’s engaging both musically and lyrically.

The album wraps up officially with the psych-campfire singalong style “Queen of Apples” – there are a number of food references on Three Minute Tease – and again, Barbeau’s trademark balance of commercial and quirky is on display. A pair of unlisted bonus tracks – one a snippet, one a dub remix – are both worthwhile; neither feels tacked-on.

Here’s hoping that Three Minute Tease isn’t just a tease, so to speak, and that the trio of Barbeau, Metcalfe and Windsor will follow up with another album of similar character and quality.