Home  »  review   »   Album Review: The Dukes of Stratosphear – The Complete and Utter Dukes

Album Review: The Dukes of Stratosphear – The Complete and Utter Dukes 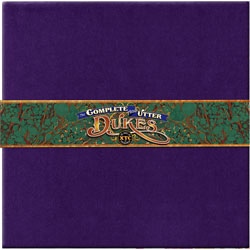 There’s a proud — if not properly appreciated — tradition in rock and pop music: recording under a pseudonym. As far back as 1965 the Four Seasons released a cover of Bob Dylan‘s “Don’t Think Twice, It’s Alright” under the moniker The Wonder Who. Dylan himself cut a few tracks in 1963 as Blind Boy Grunt. In 1968 Simon Dupree and the Big Sound released “We are the Moles,” dubbed themselves The Moles, and were outed by a jealous Syd Barrett for their trouble. Faced in 1969 with a changing pop landscape, Paul Revere and the Raiders tried getting their songs on the radio using the alias Pink Puzz. As late as the 1990s, pop-country artist Garth Brooks put out a record as Chris Gaines (oh, wait; that one sucked). Spinal Tap masqueraded as the Folksmen. And of course everyone remembers those records the Beatles cut in the 1970s as Klaatu…

Against that backdrop, the always-clever XTC recorded an EP of songs that faithfully recreated the whimsy, excess, innocence, exploration and mystery of the psychedelic era. That 1985 release 25 O’clock was credited to the Dukes of Stratosphear. The songs straddled between loving pastiche and piss-take; with titles like “Bike Ride to the Moon” and “The Mole from the Ministry” (a tune that combined “I Am the Walrus” with a not-so-subtle tribute to Simon Dupree and the gang), listeners had a pretty good idea what was in store.

The Dukes would prove to be much more than a vanity project or a blind alley for XTC. The group’s own sound was moving toward a modern version of those classic sounds, and since the group had become a studio-only affair a few years earlier, they had the wherewithal to build these fussy (in a good way) arrangements for their always-engaging songs.

25 O’clock wasn’t released in the USA (I bought my copy as a fairly expensive $6 import), and made little impression on the marketplace, save some airplay on forward (or backward?) looking college radio stations. But it pointed the way toward the future for the trio of Andy Partridge, Colin Moulding and Dave Gregory.

In 1987 The Dukes reappeared with a full-length album, Psonic Psunspot. Again they donned individual pseudonyms: Partridge was Sir John Johns; Moulding called himself The Red Curtain, and Dave Gregory once again became Lord Cornelius Plum. The record featured ten new songs (no overlap with the EP) that mined the same era for inspiration, but that at the same time expanded the sonic palette. Where the EP evoked groups like Tomorrow and the Electric Prunes, Psonic Psunspot added Barrett-era Pink Floyd and Pet Sounds-era Beach Boys (the amazing and intricate “Pale and Precious”) to the mix. In lesser hands, gimmicks like linking tracks featuring a little girl reciting nonsensical Lewis Carrollesque narration (a la 1967-era Traffic) could have made the album a slavish relic. But with the Dukes (XTC plus Dave Gregory’s brother Ian on drums as E.I.E.I Owen) behind the project, it was nothing short of a tour de force. The single “Vanishing Girl” — psychedelic pop’s distant cousin to the Tokens‘ “The Lion Sleeps Tonight” — was another in a long line of shoulda-been hits. Either way, the two discs — neither of which saw any serious chart action — were and remain essential to any fan of either UK pop-sike or XTC. Or both.

The two records were combined for the CD era and released in as the single-disc Chips from the Chocolate Fireball. Again they were re-released in 2001 as part of a larger XTC reissue series.

Now in 2009 Ape (Andy Partridge’s label) is re-re-issuing the two records, once again split into their original configurations. But this time around, there are lots of goodies to make the purchase worthwhile — even for those who have bought it all before. The new package is called The Complete & Utter Dukes.

First of all, there are loads of bonus tracks. 25 O’clock now includes demos of four of the five songs, and adds two demos for songs that didn’t make the cut on either original record. (Those songs — “Nicely Nicely Jane” and “Susan Revolving” have circulated for years among collectors, but it’s great to have them officially released.) If that weren’t enough, three more clever pop tunes are included. And there’s a video of “The Mole from the Ministry.”

And that’s only the first disc. Psonic Psunspot is expanded to include demos of six tunes, plus a video for “You’re a Good Man Albert Brown.” But still there’s more.

The package includes the aforementioned album on virgin vinyl, yes vinyl, in gatefold sleeves. Then they’re all compiled on a single CD for those so inclined. Extensive booklets are included, and then there’s the ephemera: a jigsaw puzzle, a t-shirt, and a bonus 7″ single. All of it comes in a fancy box. The price tag is fairly substantial — over $100 — but a package like this isn’t for casual fans. And it’s clear from Ape’s packaging that they really do intend for this to be the last time this material is served up. The only thing better than The Complete & Utter Dukes would be an in-person house concert from the band. And that won’t happen, since sadly, they — like XTC — don’t exist. 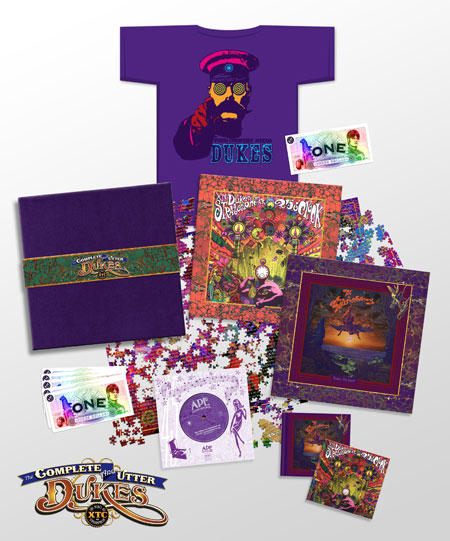