I’ll spare you the April Fools Day jokes and instead move on to letting you know about foru live-and-in-person music performances happening in the next 30 days in Asheville. Three […]
Read More

To listeners who have followed his work over the last new decades, it may appear that guitarist Eric Gales has evolved his technique. While quite good for what they are, […]
Read More 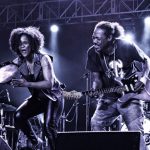 A respected electric blues guitarist who first made a name for himself almost three decades ago, Eric Gales has cultivated a career that pushes well past the boundaries of the […]
Read More