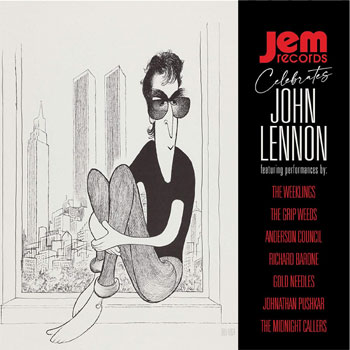 Today would have been John Lennon’s 80th birthday.

Cover versions that stick very close to the original version have their place: witness the appeal of tribute bands. But beyond the hey-I-can-do-it angle, they’re more an exercise for the artist than a rewarding experience for the listener. Much better are reinventions, musical excursions whereby an artist find what’s special (to them) within a song, seizes on that and runs with it, creating something new in the process.

Of course there’s a kind of reverence that exists around the work of the Beatles; that worship – well-founded as it may be – seems often to discourage those kinds of creative endeavors. But the artists who’ve taken the chance have often created intriguing works. Way back in 1976, art-rock supergroup 801 conjured up their own radical reading of Revolver’s “Tomorrow Never Knows” – calling it “T.N.K” – and released it on 801 Live. And a few others have tried and succeeded.

When it comes to multi-artist tribute albums – especially, it seems, within the powerpop subgenre – the artists involved tend to play things safe, making the end result less than compelling. What that means, however, is that exceptions stand out, shining perhaps more brightly than they would otherwise. And to a great extent, that’s the case with a new release, Jem Records Celebrates John Lennon. Seven artists, thirteen tracks, drawing both from Lennon’s Beatles and solo work, this collection features artists who are (at least some of the time) willing to push the boundaries.

And quite often the results of their efforts bear up. For their part, The Weeklings have carved out a corner of the musical landscape based on that very concept of re-imagining Beatles songs. So they can be expected to deliver here. “The Word” is transformed nearly beyond the point of recognition. The original version had a beguilingly curious is-it-major-or-is-it-minor nature; the Weeklings lean hard into the minor key. The beat is quite different as well, and the overall arrangement has a harder, more sinister edge.

Beyond its (for many years) rarity, the original recording of “What’s the New Mary Jane” is of limited value; it’s more of a song fragment extended to song length. But The Weeklings make it into a rocker as well, with a rhythm bed that borrows heavily (and cleverly) from the “I am the Walrus.” It’s as if all of the sonic elements of that classic were applied to the “Mary Jane.” As an exercise, it’s nothing short of brilliant. As a song, well, it’s still “What’s the New Mary Jane,” so one can only expect so much. Still, bravo.

A New York City group taking its name from a classic Badfinger song turns in three tunes for Jem Records Celebrates John Lennon. A bit strangely, The Midnight Callers tackle two Lennon compositions that are actually the same song: “Child of Nature” from the 1968 Esher tapes was re-imagined by Lennon himself a few years later on Imagine as “Jealous Guy.” The latter was superbly covered by Roxy Music on their The High Road EP, and any artist would be hard-pressed to better that version.

The Midnight Callers play “Jealous Guy” pretty straight, hewing rather close to the Imagine version; their brief acoustic reading of “Child of Nature” is more interesting, though it doesn’t seek to innovate, either. The group fares far better with a cover of “It Won’t Be Long,” an underappreciated early Beatles track. The group rocks it up, and flourishes of Rickenbacker suggest how the Fab Four might have done it in ‘66. (The Midnight Callers’ debut album is set for release later this year.)

The Grip Weeds are perhaps the most celebrated act to appear on this collection. Their trademark Who-meets-layered-powerpop approach is never, ever, ever less than compelling. They tear into “You Can’t Do That” while keeping the signature 12-string riff intact. But they add muscle and some delightful combo organ textures to the arrangement. A searing guitar solo pulls the oldie into modern-day, and the ‘Weeds’ harmonies are spot-on as always.

“Strawberry Fields Forever” is a risky choice to cover. Even the estimable Todd Rundgren couldn’t offer much in terms of ideas when he covered it on 1976’s Faithful. So the Grip Weeds earn points for even trying. The original song has so many signature components – Ringo’s fills, the “flute” Mellotron, the overall vibe – that there’s not really much one can do with it. But the group still manages to rally, adding some electric sitar where the original had conventional electric guitar, and bits of Leslie’d and slide guitar textures, sonic elements more readily associated with late-period Beatles. As the song progresses, they also lean into the beat a good bit harder. The string orchestration is replaced by a rock ensemble (and more electirc sitar) playing the familiar parts. And they wisely dispense with the false ending.

Nashville power popper Jonathan Pushkar turns in a pair of Lennon tunes, one solo and one from the early Beatles era. Although its significance would change in the wake of Lennon’s tragic and senseless death, but at its core “(Just Like) Starting Over” is a ‘50s pastiche. Pushkar’s cover is lovely in and of itself, but offers precisely nothing in terms of new ideas or originality. (Some minor tinkering with the vocal melody doesn’t count.) Oddly, the backing vocals on this decidedly retro tune sound as if they’re the product of the chorus setting of a Mellotron.

Pushkar fares only slightly better with “I Call Your Name.” He changes the key and uses a guitar sound that lacks the original’s jangle. Again, there’s nothing at all wrong with his reading; it’s just that it doesn’t go to any length to justify its existence. The orignal’s ersatz ska interlude is replaced by something more ordinary as well.

The Anderson Council’s name is an in-joke familiar to Pink Floyd fans. But the band’s music sounds not a bit like the Floyd. Here, it doesn’t sound much like Lennon, either. John Lennon / Plastic Ono Band’s “I Found Out” is a spare, stark number. The Anderson Council skillfully fleshes out the arrangement, putting their own stamp on it; the result is vaguely suggestive of how one imagines Lenny Kravitz might have done it. The solo is one of the rocking-est moments on the album.

The sole UK-based act on this collection, The Gold Needles tackle three tunes in the space of two. In their hands, “No Reply” sports a character halfway between soaring ‘90s Britpop and ‘60s Merseybeat. The backing for the “I nearly died” passage is heavy stuff reminiscent of Blur or Oasis.

The Gold Needles hit the creative bullseye with a medley of “Cold Turkey” and “Hey Bulldog” as well. The inventive manner in which they hybridize the tunes recalls some of Giles Martin’s tape-splicing work on the Beatles’ Love, but The Gold Needles’ approach is more organic (and harder rocking). It may well be the best track on this solid collection.

Speaking of medleys, Richard Barone (The Bongos) weighs in with a two-for-one of his own, a reading of incendiary tunes: “Revolution” and “Power to the People.” There’s certainly a thematic link between the songs – though they were written four years apart – and putting them together would seem inspired, especially in 2020, when the idea of resistance against the entrenched powers resonates. But Barone seems to have other ideas. The bouncy, peppy keyboard on “Revolution” – the only instrument not played by Barone – does seem a bit out of place, and the manner in which the massed vocal chorus sings “Power to the People” may to some strike an odd, too-cheery-by-half tone as well. Still/however, viewed outside the context of the lyrical intent, it’s a fun recording that’s worthy of praise.

Taken as a whole, Jem Records Celebrates John Lennon is several notches above most other projects of a similar stripe. At its weakest, it’s harmless, inoffensive and entertaining. At it best – which I’m happy to report is represented by a good deal of its content – it offers fresh and original takes on the music of a legendary figure. It’s a fitting tribute.