In 1976, taking a break from his duties in Roxy Music while that art-rock group went on hiatus, guitarist Phil Manzanera assembled a group for a one-off (well, three-off, but you get the idea) concert. Drawing in some very heavy friends, Manzanera dubbed the group 801, after a lyric from a song by the group’s vocalist, one Brian Peter George St. John le Baptiste de la Salle Eno. Yeah, that guy: the synthesist and self-described “non-musician” subsequently responsible for some of music’s most critically-lauded productions (see: U2, Talking Heads, Laurie Anderson, DEVO). 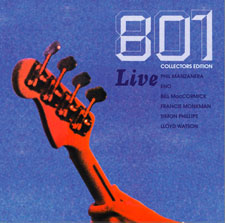 While the 801 lineup was virtuosic, the arrangements were at once quirky and muscular. The dozen songs performed at their few concerts were a mixture of solo material from Manzanera’s and Eno’s catalogues, plus some really out-there covers in really out-there versions. The tracks most often mentioned when discussing the 801 Live album include the Beatles‘ “Tomorrow Never Knows” (here dubbed simply “T.N.K.”) and a cover of the Kinks‘ “You Really Got Me” that presaged in some ways the Flying Lizards‘ take on “Money (That’s What I Want)” a few years later.

The instrumental interplay is exciting, and there’s something for all lovers of slightly off-kilter art-pop here. Francis Monkman‘s keyboards add a lot to the songs, and the powerful, nimble, precise drumming of Simon Phillips set the stage for the rest of the drummer’s career.

In 2009 the 801 Live album was reissued (in excellent sonic quality, but then the original was an exemplar of the best live recording techniques of the 70s) as 801 Live Collectors Edition, with a bonus disc. In researching for the album, producers located a recording of a rehearsal from a week or so before the gig. While the sound quality is only good (note that this recording was never originally intended for distribution), the performances are exquisite. Following almost exactly the set list for the show, the bonus disc is worthwhile. While my review copy was in a cardboard slipcase, if you buy it, you’ll get a deluxe package.

Postscript: a few years later Manzanera put together another lineup of 801 and recorded a studio album. That set — while harder to locate — is also highly recommended, but interested parties should note that it sounds almost nothing like the live 801 lineup. Instead it bears a sound closer to Supertramp or mid-period Genesis.