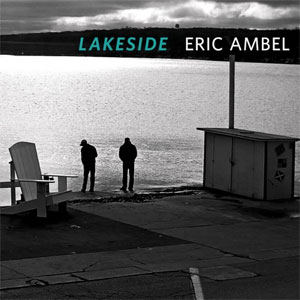 Indie cred: it’s an elusive quality, one that most artists would be pleased to possess. Indie cred connotes a level of achievement that suggests one’s work is more than ephemeral, more than disposable, worth further investigation. Once you’ve got it, if you’re the real deal, you’ll hold onto it.

One fine Exhibit A for this indie cred would be Eric “Roscoe” Ambel. As guitarist for the Del-Lords, Ambel established his reputation as an impressive roots-rooted musician with a straight-ahead, no b-s- style. The list of artists with whom he’s worked also says a lot about his musical values; said list includes the Bottle Rockets, Mojo Nixon and Sarah Borges, to name but two of many.

Ambel’s solo career has, however, largely flown under the radar. Though he has (apparently) released three albums prior to his newest (Lakeside, out now), he hasn’t gained much in the way of high-profile press about them. (At least not that I could find in a cursory look online.)

Ambel owns a club in New York City’s East Village called Lakeside Lounge, and – so says his bio – he programs the jukebox there. (Lakeside‘s inner sleeve features a color photo of the machine in question.) Just like that jukebox, the new album reflects Ambel’s musical values.

“Here Come My Love” is no-frills, I-IV-V rock’n’roll, with a sound that recalls – oddly, and of all things — Billy Swan‘s “I Can Help.” But unlike Swan’s c&w hit, Ambel’s tune is adorned with some tasty electric guitar leads.

“Hey Mr. DJ” kicks off sounding like sludge-rock a la Black Sabbath (rarely a bad thing, that). The tune’s wry lyrics (courtesy of Lakeside producer Jimbo Mathus) will bring a smile to the most jaded listener; when he sings “crank that shit all over the place,” you know he means it. As the song unfolds, the backing vocals stray from following Ambel’s lead, and the feeling is akin to that when you’ve had a few too many beers in a place where a cover band is playing. The guitar slash that end the tune sounds like it could draw blood.

“Have Mercy” has a sexy, slinky vibe, and is an exemplar of the kind of unaffected solid rock that comes out of the tri-state area (see also: Smithereens). “Let’s Play With Fire” equally recalls Johnny Cash and The Blasters; that alone should be more enough to recommend the song. A steamrolling snare figure and an uber-heavy riff anchors “Don’t Let Me Break You Down,” an Ambel/Mathus cowrite that recalls – both in its vibe and relative length – Neil Young‘s work with Crazy Horse; it quotes a lick from Don Nix‘ immortal “Goin’ Down.” (Ambel seems to have had some trouble settling on a song title here; the outer sleeve and LP label say “Break,” while the inner sleeve says “Shake.” Shake, break, bake…it’s an ace tune regardless.)

Mathus’ “Massive Confusion” kicks off Side Two of the limited-edition vinyl LP. Stuttering guitar figures, a propulsive melody and some loose-limbed massed vocals make for a fun, danceable tune. Ambel lets his lead guitar prowess fly, albeit in small (if highly charged) bursts. “Look at Miss Ohio” (from the pens of Americana heroes Gillian Welch and David Rawlings) slows things waaay down for an melancholy story-song. Mid-song, Ambel pulls out all the stops for a lengthy, searing guitar workout. Phil Cirtino‘s splashy drum work makes a great tune even better; near the end Ambel and band quote Jimi Hendrix‘ reading of “Hey Joe.”

Ambel’s solid-rock version of Barrett Strong‘s classic “Money” isn’t terribly original, but it swings like a hammer. I’m guessing that if you heard Ambel tearing into this one live onstage, it would sound exactly like this; Mathus’ production work is an exemplar of the capture-it-live aesthetic.

An eerie, forlorn blues, “Buyback Blues” is a showcase for some spare yet blistering guitar work from Ambel. The tune is played so slow it threatens to stop in its own tracks, and that arrangement suits the song nicely. The ten-disc album wraps up with a country-flavored weeper, “Cryin’ in my Sleep.” Like classic album closers of old, the song has that late-night, stools-upended-onto-tables ambience. The instrumental recalls “The Lonely Surfer.” It’s a fine finish to an album that delivers in a big way yet leaves the listener wanting more. Recommended.