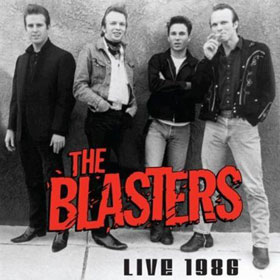 Over the years, rootsy rock has had its moments on the cultural landscape. Every so often, it seems – typically when rock or pop music veers more than usual toward vapidity and lack of substance – some musicians take a look backward for inspiration, coming up with something exciting and compelling in the process.

Of course, that’s not at all true: there are always artists mining the past for influences; it’s simply that on occasion the marketplace (or the powers-that-be) decide – if briefly — to take notice.

The Stray Cats were as good as any an example of this dynamic at work. The trio took a retro approach – both visually and sonically — and subtly updated it for modern audiences. They were rewarded with a string of hits, and they rode the crest of popularity until the wave smoothed back out.

The Blasters were less stylized, but drank from a similar well of inspiration. Their brand of rock was fueled by the harder-edged end of their historical antecedents, and instead of applying a rockabilly sheen, the Blasters leaned in the direction of country and western sounds. But they did so in a way that delivered a wallop. Paving the way for future bands trading loosely in that style, the Blasters influenced acts like The Long Ryders, BoDeans, and (later) Old 97s, to name just three of many.

In possession of a less-than-accurate picture ID, I tiptoed into Atlanta’s Agora Ballroom in the very early 1980s to witness a Blasters show.  I found them raw, powerful and aggressive: they delivered a countrified sound with all of the punch of punk groups. In those days the group wasn’t especially well-known in our part of the country; I vaguely recall that they might have even been someone else’s opening act. But they delivered.

A few years later – admittedly, after I had lost track of the band — the group released its fourth album, 1985’s Hard Line. As is the case with many groups at a certain point in their career, that record represented something of a rethinking of the group’s approach. Though their previous efforts had expanded the sonic core to include additional instrumentation, Hard Line was more akin to a Blasters version of The Beatles’ Get Back project: stripped-down rock and roll. Though it charted respectably (peaking at #86 on Billboard’s charts), it would be the final release from the band’s original era.

Co-founders and brothers Phil and Dave Alvin played some of their final shows together under the Blasters banner on St. Valentine’s Day 1986 in San Juan Capistrano CA. Tapes were rolling, and now – more than a quarter-century later – one of that night’s performances has been released on Rockbeat. Though unimaginatively titled, Live 1986 documents the onstage power of The Blasters.

Sounding very much like a monitor mix, Live 1986 presents Phil Alvin’s growling vocals way out front in the mix. The sound is clean and clear, but lacks the live ambience one usually finds on good live albums. Production-wise the album sounds very much of its era. Perversely, a bit of feedback now and then adds to the recording’s authenticity. In total, Live 1986 sounds a lot like the sort of 1980s mixing board tapes that have long circulated among rock fiends.

The set list on this night leans more toward Dave Alvin’s original compositions (Dave wrote ‘em, and Phil sang ‘em, y’see), but listeners unfamiliar with the Blasters catalog will have a hard time spotting which songs are Blasters originals (often sounding themselves like rethought versions of classic old songs) and which are actually well-chosen nuggets from rock’s early days. The most well-known song on the set list is a fine reading of “Mystery Train.”

Packaging on the disc is minimal: a bit of Photoshopped stock images, a press kit photo of the ‘85/’86 lineup for a cover, and a seemingly hastily-written liner note. The same level of quality control applied to the tapes (produced for this release by the Alvin brothers and liner note-writer James Austin) was not applied to the packaging: the spine credits the album to The Blaster (sic). Skip the liner notes, ignore the typos and enjoy the music.