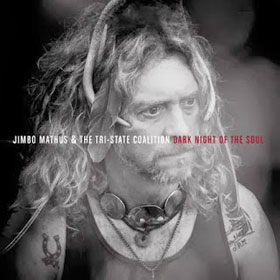 I can make no legitimate claim to an ability to define Americana. Like the former chief justice said about another art form, I know it when I, um, hear it. And for my money, Jimbo Mathus‘ Dark Night of the Soul fits that description in the best way.

For those who haven’t been paying close attention to his music, the album comes as quite a shock. There was little or nothing in his Squirrel Nut Zippers days to suggest he’d ever make this kind of music. That late-late-90s sensation scored a hit with “Hell,” a song that unwittingly (unforgivably?) presaged today’s innumerable hordes of early-jazz pretenders, though the 2014 version identikit often includes vintage three-piece suits, fedoras, arm garters, Civil War-era beards and shit-eating grins.

But Jimbo Mathus and his music are miles away from all that. On Dark Night of the Soul, Mathus crafts a world-weary collection of tales in a kind of Southern gothic mold, and takes the listener on a musical travelogue of truly American styles. The opening (title) track opens with a rickety, reverbed piano that recalls nothing so much as Big Star‘s Third. As the song unfolds into a languid rocker, shades of Randy Newman appear, shot through with Mathus’ own signature style. The heavily distorted guitar on “White Angel” signals that Mathus will be serving up some southern rock. But he does it with shade, light and subtlety: quiet parts contrast nicely with bluesy guitar licks and a slow, stomping and insistent beat.

With a title like “Rock N Roll Trash,” you’ll have a pretty good idea what to expect. Well-worn chord changes recall some odd hybrid of Leon Russell and The New York Dolls. In anyone else’s hands, “Shine Like a Diamond” would be slick enough to earn the tag “radio ready,” but Mathus’ hoary vocals apply a sense of authenticity that prevents that characterization. The scintillating B3 work conjures thoughts of The Band, and the outro’s sha-la-la vocals hint at a Van Morrison influence at work.

“Writing Spider” sounds like a Blood on the Tracks outtake with a much better vocalist. The song’s delightful and subtle electric 12-string is an unexpected bit of texture. “Tallahatchie” is one of only three co-credits on the album; Mathus composed the other nine on his own. It’s a country blues-infused midtempo ballad with some appealing tack piano and gospel-flavored Delaney and Bonnie-style backing vocals.

The first chords or two of “Burn the Ships” feel a bit like – of all things – George Harrison‘s “My Sweet Lord,” but the tune almost immediately heads in a very different direction, out-distorting Rust Never Sleeps era Neil Young and Crazy Horse. (And don’t let all my talk of the instrumentation and arrangement distract you from the lyrics; Mathus is a deeply evocative and colorful lyricists, and the tunes on Dark Night of the Soul wold likely read well as poetry/prose.) 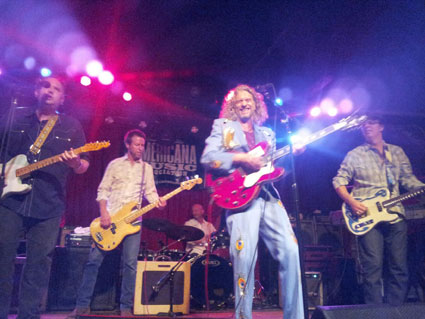 Anyone who heard Mathus’ excellent 2012 EP Blue Light knows that he’s an accomplished and varied stylist; calling that record a grab-bag wrongly suggests a haphazard approach. His wide stylistic palette is evidenced here with “Fire in the Canebrake,” as funky and soulful a tune as you’ll find. “Hawkeye Jordan” is a story-song in the tradition of Lynyrd Skynyrd‘s “The Ballad of Curtis Loew,” but with a brief, jaunty midsection. The pedal steel work on this cut is especially tasty.

While Jimbo’s influences are near the surface on all the original tunes on Dark Night of the Soul, he imbues his compositions with original character that stakes out his own individuality. The exception to this rule is “Casey Caught the Cannonball,” which sounds like a Band pastiche, albeit a very good one. Here, Mathus even adopts the vocal mannerisms of Rick Danko. Mathus slows things way down for “Medicine,” a junkie tale worthy of Tonight’s the Night. Some vibrato’d Wurlitzer electric piano and dulcimer or banjo (that sounds more like a Japanese koto) leads off the album closer, “Butcher Bird,” ending the album on an appropriately spooky and confusing note.

On one hand, Dark Night of the Soul sounds like one of the best mid 70s rootsy rock albums you’ve never heard. On the other, it represents a distillation of all Mathus’ influences into something fresh and original. Either way, it’s one of the strongest albums of 2014 to date.