Here’s another in my occasional series of quick cuts. This time ’round I’m covering recent releases by names who’ve been around the block a few times. These are people whose work you’ll know (or will recall once I remind you) but who perhaps haven’t had a high profile of late. My self-imposed limit for each of these capsule reviews is 200 words. 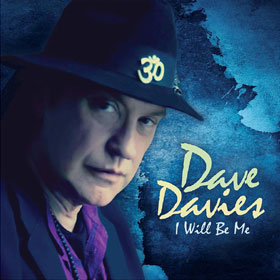 Dave Davies – I Will Be Me
Davies (pronounced Davis, please) is of course best-known as the lead guitarist in The Kinks, and as half of the fraternal duo who established the template for familial rock’n’roll in-fighting (see also: Liam and Noel Gallagher). On I Will Be Me, Davies presents his familiar signature guitar tone, but exploits its a bit uncomfortably on the opener “Little Green Amp,” which borrows a bit too much from his past. Dave’s never been the singer brother Ray is; on “Livin’ in the Past” (a title seemingly used without a hint of irony), Dave strains to hit the notes, chugging out riffs from 1965 while backed by the most pedestrian lot imaginable. The set was produced by one Jurgen Engler, most well known for producing Sly Stone‘s “comeback” (sic) album. A distressing tendency toward “guest artists” doesn’t serve Davies well; the man is obviously a talent and an important figure in rock’n’roll; fans of his work are advised to pull out a Kinks LP instead, and/or wish for his eventual musical rapprochement with his older sibling. In the wake of his 2004 stroke, fans should be grateful to have any music from him, but this album remains disappointing. 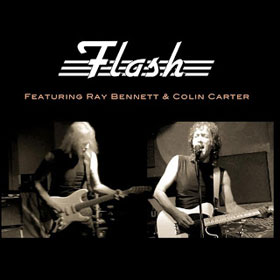 Flash – Featuring Ray Bennett & Colin Carter
Flash is one of those bands that remained under the radar throughout their heyday (such as it was). Founded by ex-Yes guitarist Peter Banks (who left that group before they broke big, to be replaced by Steve Howe), Flash released a handful of early 70s LPs remembered more for their T&A-centric cover art than for the music. Said music was pretty good, sort of a mainstream rethink of the Yes aesthetic. The band in those days featured both Ray Bennett (bass) and rhythm guitarist Colin Carter. That duo have reunited and revived the Flash name for this 2013 effort.  Musically the 21st century Flash sounds like solo John Wetton (circa Caught in the Crossfire) or a less bombastic take on Asia; put another way, they successful apply prog-leaning chops to more conventionally pop-oriented material. Speaking of which, Carter’s voice sounds like what you might guess if you crossed the pipes of Wetton and Jon Anderson. This album sounds as if punk and grunge never happened, but it also sounds like most of the overblown 80s hair-band junk never happened either. Though it’s perhaps a bit out of time, Flash Featuring… is enjoyable for fans of any of the aforementioned acts. 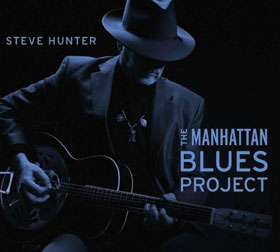 Steve Hunter – The Manhattan Blues Project
Steve Hunter is a journeyman guitarist, a go-to guy whose expertise has been enlisted on many projects throughout rock’s commercial era. My favorite Hunter work is his twin-lead guitar intro (titled “Intro”) with Dick Wagner on Lou Reed‘s Rock and Roll Animal. But on his latest, Hunter takes a late-night bluesy approach. The album art – dim, black and white photos of man with guitar – telegraphs The Manhattan Blues Project‘s aesthetic. He lets his guitar wail on “222 W 23rd” and other tracks, but it’s a slow burn; Hunter doesn’t unleash his fury all at once. This approach makes the bursts of fire even more welcome, more impressive. “Tasteful” is a word that is sometimes used as a damning-with-faint-praise, but Hunter’s playing earns the title. The record sneaks up on you, drawing you in with sultry, slinky arrangements. But just when you’re settling into the vibe (and the melody), Hunter lashes out some six-string electricity in your direction. Subtle hints of the styles of others (Joe Satriani, Ry Cooder, Mark Knopfler) crop up here and there, but that has more to do with those artists drinking from the same well of inspiration. Hunter’s his own man. 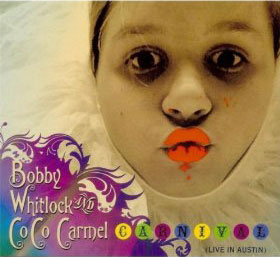 Bobby Whitlock and CoCo Carmel – Carnival: Live in Austin
Bobby Whitlock‘s main claim to fame – and it’s an impressive one – is as keyboardist/vocalist in Derek and the Dominos with Eric Clapton. But there’s been much more to his career than that, including a highly-regarded solo debut in 1972. His expressive, husky blue-eyed soul vocals and deft keyboard work has always been worth hearing. Little was heard from the man between the mid 1970s and the end of the 20th century, but since 1999 he’s had sporadic releases. His latest is a live set with vocalist CoCo Carmel, a female belter in the Bonnie Bramlett mold. (She’s also Bobby’s missus.) Carmel has an impressive range and expertly balances abandon and control. This well-recorded set finds the duo backed by a solid band, and digging well into cuts from Layla and Other Assorted Love Songs; the readings aren’t slavish retreads; they breathe life into the 1970 material. Newer tunes (like Carmel’s “Nobody Knows”) fit well alongside the classics, but most anything would suffer by comparison to Layla tunes. Still, multi-instrumentalist Whitlock’s tasty slide guitar enlivens the lesser-known numbers. Fans of greasy down-home blues-inflected rock’n’roll will dig this. “Keep On Growing” is the highlight, but it’s all good.