We’re living in unprecedented times, aren’t we? No fooling.

“30 Days Out” was launched nearly six years ago as a means of letting people in and around my adopted home of Asheville, North Carolina know about upcoming and notable live music performances. Well, as my local brethren might say, “ain’t none of those right now.” But there’s still plenty of music being made. Sure, in April 2020 it looks like more than 90% of guitarists are playing left-handed (that’s a curious idiosyncrasy of live-streaming via smartphone) but we can live with that. Note that in nearly all cases, these performances are nominally free, but viewers are strongly encouraged to support these artists via their virtual tip jars.

A challenge is that like all of us, these artists are reacting to rapidly-changing situations. That means that livestream shows often aren’t conceived – and thus not announced – until a day or so before they happen. As we all settle into the “new normal,” I expect this will change. But for now, there is a limited supply of scheduled-ahead live music content in Asheville. I’ll keep my eye on things and update as I can. For now, the folks at Independent Arts + Music Asheville have the most consistent schedule of events, so my listing reflects that. All artists are Asheville-based except as noted All times are EDT. 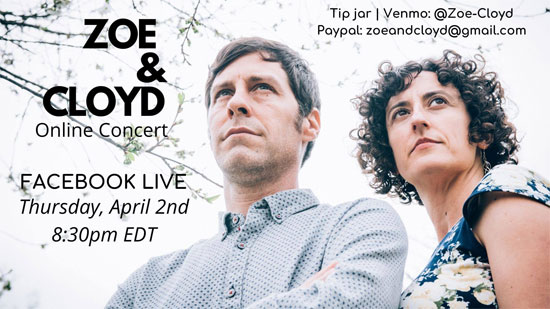 Artist: Zoe & Cloyd
Venue: Facebook Live
Date: Thursday, April 2, 8:30 p.m.
Tip jar: Venmo: @Zoe-Cloyd Paypal: zoeandcloyd@gmail.com
Finely-crafted songs, exquisite harmonies and the sophistication that comes form having a classically-trained violinist as half of the duo are just some of the elements that make Asheville-based Zoe and Cloyd special. I’ve reviewed two of the Americana act’s albums: read more about 2017’s Eyes Brand New here, and get some background on 2019’s gently political I Am Your Neighbor here. 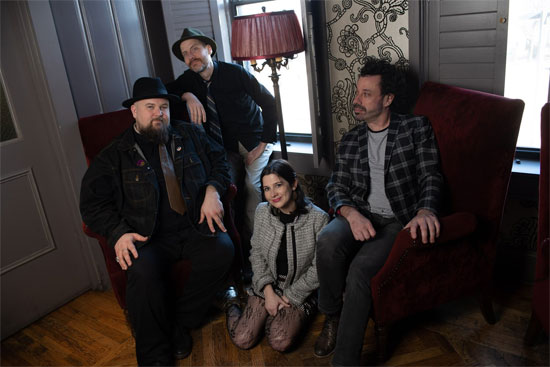 Artist: The Claudettes
Venue: Americana Highways
Date: Thursday, April 2, 8:30 p.m.
Tip jar: Venmo: @zach-verdoorn Paypal: paypal.me/JohnnyIguana
Based in Chicago, this group is delightfully difficult to pin down. Johnny Iguana’s Barrelhouse piano is at the center of the group’s music, but there’s so much to love that the music requires multiple listens to even begin to absorb it all. Their assets include wit, verve and thrilling instrumental work. I’ve followed the band’s progress and count myself as a major fan. Read about: Infernal Piano Plot…Hatched! (2014), No Hotel (2015), Dance Scandal at the Gymnasium! (2018) and their latest, High Times in the Dark. You may also enjoy a profile I did on the group for their hometown altweekly, NewCity. The Americana Highways show is scheduled to run 30 minutes. 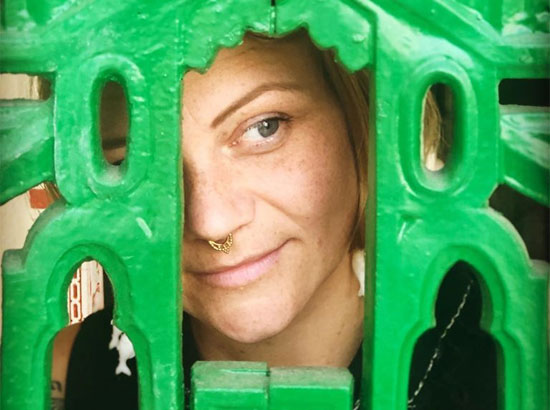 Artist: Sparrow Pants
Venue: Independent Arts + Music Asheville
Date: Saturday, April 7, 7 p.m.
Tip jar: Paypal (include the artist’s name when you complete the form)
Sparrow Pants is one-half of the duo Resonant Rogues; with Keith Smith she makes her own brand of music, combining Appalachian old-time bluegrass, prewar hot jazz and fol rooted in Eastern European traditions. If that sounds intriguing then I’ve done my job, because it is. Resonant Rogues have already done a pandemic-era livestream, but this show for IAMAVL is billed as a solo performance. Sparrow says she’s working on some new material; will it show up here? Tune in and find out. Read more about Resonant Rogues here.

Artist: Dr. Bacon
Venue: Independent Arts + Music Asheville
Date: Sunday, April 8, 7 p.m.
Tip jar: Paypal (include the artist’s name when you complete the form)
Maybe it’s something about Asheville, but our little mountain city has more than its share of musical acts who throw multiple unrelated styles into a blender and come up with something unique. Dr. Bacon certainly does: their press describes them this way: “… blend of funk, soul, jazz, rock, blues, folk, hip-hop … featuring guitars, resonator, harmonica, bass, tenor saxophone, baritone saxophone, drums, trombone, violin, lap steel, mandolin, kazoo and more.” Before the pandemic, the band was finding its way onto festival bills. I interviewed them in 2017, back in their formative days when the elements were still struggling to coalesce. Read more about that here.