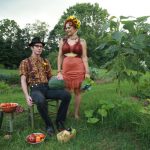 Led by the duo of Sparrow and Keith Smith, Asheville-based band Resonant Rogues combines flavors of Appalachian old-time, early jazz, and Eastern European folk to create a distinctive and original sound. The group’s latest album, Hands in the Dirt uses that sound as a backdrop to lyrics that focus on universal – and sometimes very
Read More