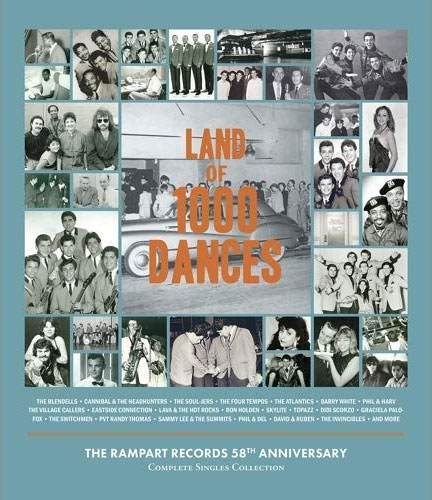 Though there were certainly earlier examples, the era of the lavish boxed set began a few decades back; it more or less coincided with the CD era. And it persisted well into the 21st century. In the last few years, it seems to have trailed off, though superb exceptions to that rule continue to pop up, shining light on unexpected corners. In 2017 a 6CD box (with book and cloth record-shopping bag) called The Brain Box: Cerebral Sounds of Brain Records 1972-1979 explored the wonderful (West) German label, home to unheard delights of progressive rock, krautrock and more. More recently 2018’s Battleground Korea: Songs and Sounds of America’s Forgotten War explored the “police action” from a musical perspective; it’s an unexpectedly fascinating, eclectic and enjoyable collection. And earlier this year saw the release of Cadillac Baby’s Bea & Baby Records: The Definitive Collection, a set chronicling the musical history of the tiny Chicago-based label.

It’s that last one which is closest in nature to the newest boxed set to land on my desk. Land of 1000 Dances: The Rampart Records 58th Anniversary Complete Singles Collection is just what the title says: a 4CD set that includes the a- and b-sides released by the Southern California label. Launched by Eddie Davis, the label (and associated labels) released an astoundingly high quality string of singles during its multi-decade run.

In the label’s earliest days, Rampart served as a key vehicle to showcase the musical output of Latino/Mexican-American bands like Cannibal and the Headhunters. The sides by that group and others of a similar stripe are simply superb; cuts like a cover of Stevie Wonder’s “La La La La La” by the Blendells have an undeniable energy that’s as vital today as it must have been in June 1964. The label cast a wide net, though; while keen listeners will hear sonic connections to acts like El Chicano, Thee Midniters, Malo and so on, this is most decidedly not a “Latin rock collection.” It’s that and more.

Land of 1000 Dances is jam-packed with excellent (if little-remembered) recordings like that. Nearly 80 tracks fill the four discs, covering a wide array of styles from party rock to R&B to ersatz Motown disco to soul to MOR pop and more. The uniformly high quality of the music is remarkable; as I’ve written about a select few other collections, one could fib and tell a less-informed person that these were all hits, and they’d be believable.

And a full listen yields surprising rewards. Disc 4 opens with both sides of a 1981 single from Raven, a group about which even the compilers know virtually nothing: “Rock and Roller by Night” and “Flame of Love.” Those tracks display a muscular, cusp-of-new-wave rocking attitude, with an edgy rocking vibe and superb massed vocal harmonies. Those records must have been pressed in exceedingly few numbers; neither 45cat.com nor discogs.com lists them. (You’ll have to pick up the set to hear it; at the time of this writing, these lively sides aren’t on YouTube, either.) Nearly as good are a pair of sax-forward new wave tracks from 1985 by Lava & the Hot Rocks, “Baby We’re Through” and “Here I Go.” Both may lead some listeners to think of a (much) harder-rocking Motels. Stay ’til the end and marvel at a 1976 disco version of “La Cucaracha.” No, really. It’s kinda cool, if not more than a little … weird.

As amazing as the music is, what elevates this set from very, very good to just-about-perfect is what else is included. The package itself is a hardbound, full color book. Divided into four sections, it’s every bit as essential to the music. One couldn’t hope for a better companion to the CDs. Luis J. Rodriguez’s extended essay, “The Rampart Story: Capturing the Dynamism of East Los Angeles Music for Over Fifty Years” is essential reading. The same is true about Don Waller’s “The Rampart Records Story.” Waller’s “Rampart on the Road” is an eye-popping collection of photos and memorabilia, sourced from the personal collections of those involved in the scene that Rampart chronicled.

And the track listing section is meticulously annotated, right down to indicating the songwriting share of each listed composer, the recording personnel (when available) and other information of interest to inveterate crate-digging, liner-notes-obsessions musos such as this writer.

But Land of 1000 Dances isn’t merely for them (us). No, it’s such a delightful and fun-filled collection that anyone with an interest in popular music of the last half-century plus should give it a spin. The crowd sounds dubbed onto many of the recordings (think The Premiers’ “Farmer John” as the most well-known example) may be technically fake, but the exuberance captured in these sides is very, very, very real.