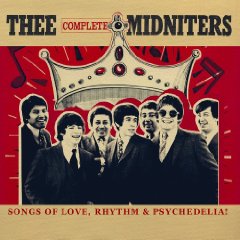 Let’s face it. Lots and lots (…and lots) of bands in the 60s covered the standards on record. So why would you be interested in plunking down good money for a box set that includes yet another band covering “Johnny B. Goode”, “Slow Down”, “It’s Not Unusual” and “Land of 1000 Dances”? And, a pretty obscure band from Los Angeles at that, one that never achieved any success outside southern California?

Good question. The answer is pretty straightforward: because it’s good. Damn good in fact. The energy on the 70-plus tracks that make up the four-disc set Thee Complete Midniters: songs of Love, Rhythm & Psychedelia! somehow always manages to strike the right notes, the right emotion.

Sure, much of the time Thee Midniters sound like they’re playing at a local dance. But, tell me now: is that a bad thing in any way? I daresay no. There’s an immediacy to these songs that would make poor fidelity, poor recording techniques moot.

But here’s the thing: these recordings sound fine! It’s no small feat to get the balance right, especially when the budget’s tight and the band includes a horn section. But here’s what’s even more amazing: all four discs — the original albums plus ample bonus numbers — were produced by the band themselves. They worked throughout their entire career with engineer Bruce Morgan in local Hollywood studios.

Tight-but-not-slick horn charts, wheezy-cheesy Farfisa and arrangements that evoke choreography that would make Los Straitjackets jealous: these can all be found in the set. Soulful vocals that get the point across are backed by ferocious playing; listen to “Love Special Delivery” for proof. Thee Midniters always delivered the goods. Even on crooning numbers like the slow-dance favorite “Love Makes Me Do Foolish Things” they update the fifties aesthetic with enough grit and soul to make the cover memorable and worthwhile on its own terms.

Thee Midniters didn’t so much reinterpret the standards of the day, nor did they ape the originals. They pretty much played ’em like they heard ’em, naturally imbibing the arrangements with their own inimitable spirit. Their original numbers are what they’re perhaps best known for, but the smoking covers — even “Do You Love Me” with its squawking saxophone leads — benefit from Thee Midniters treatment.

That said, when the situation called for it, the group were ace mimics: “Soul and Inspiration” features a pretty convincing Righteous Brothers style vocal wedded to a Farfisa-dominated arrangement that could come from nowhere but this band.

The sides contained show Thee Midniters to be that rarest of creatures: all-around entertainers. They convincingly turn out semi-big band arrangements of “Heat Wave” with the sort of verve not usually found outside a Treniers record. And they rock hard on their most well-known number, the Stones rewrite “Whittier Boulevard”. The live bonus performance of the oft-covered “Land of 1000 Dances” features real screaming girls; the Beatles weren’t the only act giving rise to claims of not-a-dry-seat-in-the-house.

Yes, Thee Midniters were the great Chicano band of the sixties. Sure, they influenced Los Lobos. But you know what? Labeling them as such sells them criminally short. These guys were an incendiary live act, and their studio sides are uncharacteristically accurate in their ability to capture that live ambience.

If your idea of Latin-flavored 60s rock begins and ends with Carlos Santana, you need serious help. And if your knowledge extends to Doug Sahm, Sam the Sham & the Pharoahs, The Premiers and such, you’re on the right track. This collection is way beyond essential: if you don’t own it, you are at serious risk of rock and roll deficiency. Run don’t walk to your favorite record outlet and purchase Thee Complete Midniters: Songs of Love, Rhythm & Psychedelia!

The packaging is lovely. Not a bit of plastic to be found, save the disc themselves and the shrinkwrap. Each of the four discs is housed in its own foldout cardboard sleeve, replete with original artwork and photos. Yes, these guys really did turn out four albums; all are impossibly rare now, and for many years one couldn’t find Thee Midniters on disc anywhere. But this comprehensive set remedies that injustice.

Note: Readers interested in learning more about this underappreciated band are advised to check out Richie Unterberger‘s excellent book Urban Spacemen and Wayfaring Strangers. It features a whole chapter on the band, alongside essay-interviews covering other acts of interest to anyone who’s read this far (The Pretty Things, The Fugs, etc.).