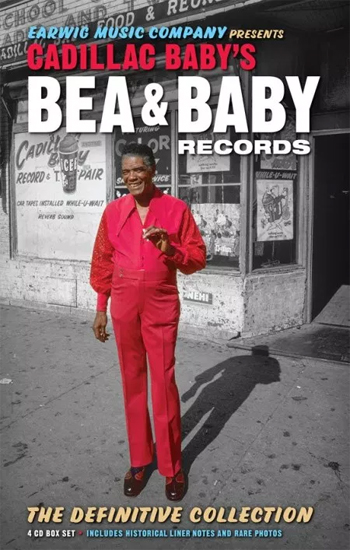 From the perspective of crate-diggers – amateur and professional music archivists alike – one of the great benefits of the digital age has been the rescuing of obscure recordings. Against the backdrop of the recently revealed 2008 Universal fire in which countless audio masters were lost, it’s some comfort to discover that the catalog of a little-known Chicago label, Bea & Baby – has been rescued from obscurity.

Production issues so common to the creation of carefully-curated sets like this have caused some minor delays in bringing the set to market, but the 4CD-plus-book set is expected soon. I spoke with Michael Frank about Cadillac Baby and the Bea & Baby label.

How did you first meet Cadillac Baby?

I had actually known about Cadillac Baby because of Jim O’Neal’s article in issue No. 6 of Living Blues in 1970.

I met him the first time in the summer of ’74 when I was asked by Bob Koester at the Jazz Record Mart to take Peter Shertzer – from Red Lightnin’ Records in England – to see Cadillac Baby on the Southside of Chicago. Since I knew the Southside and felt comfortable going out there, I gave Peter a ride out there. And it was a very brief meeting for me. Peter signed a licensing deal with Cadillac Baby at the time for the blues stuff, a three-year licensing deal.

But I saw Cadillac Baby again – and for a long period of time – around summer or fall of ‘88 when the mother of Richard Davenport, a 17 year old hip hop rapper in Chicago, called me. From what I remember, Maxine was trying to make a record deal for her son. She knew Cadillac Baby, and she also knew Sunnyland Slim. And it just so happened I was spending a lot of time with Sunnyland Slim; I had bought his Airway Records masters from him. So, coincidentally, she knew them both; I figured that’s how they got my phone number. I agreed to meet her and Richard and Cadillac Baby, and then I signed Richard to a record deal to do a single, two tracks. We took Richard Davenport into the studio in January of 1989.

And meanwhile, I continued to spend a lot of time visiting Cadillac Baby and talking to him about his record label and his publishing. I tried to help him get back in touch with the licensees of his blues stuff, try to help him to regain royalties that he never got. So, that’s how that relationship developed.

As represented on the new boxed set, the Bea & Baby catalog is pretty eclectic. Did that reflect Cadillac Baby’s own taste or was it more a set of commercial consideration?

I think it was both combined. He really loved a lot of the music and the artists; he had a club, you know. But he also loved gospel; he talked about it in his interviews with Jim O’Neill. He recorded gospel music for commercial reasons, but he did genuinely love that style of music.

What kind of commercial success did his releases have?

He had a couple that actually sold decently regionally, but not very many. I’m not sure if he even made money on a lot of them, but a Bobby Saxton 45, “Trying to Make a Living,” was on Bea & Baby and then that ended up on Chess. Detroit Junior got a lot of airplay around Chicago and the Midwest. And Eddie Boyd was relatively well known also and had been on Chess before.

But in terms of sales, none of them made the Billboard chart. Judging from some of the invoices from the distributors and the pressing plants that I have, Bobby Saxton and The Daylighters – which was a doowop group – sold maybe 10,000, 15,000.

When you purchased the catalog from Cadillac’s widow, what did you actually get?

I got one half-inch reel of tape that was part of the Colossal Blues LP that Cadillac Baby put out in ‘74. So some of the tracks that were on that. And I got a few 45s that she still had. I had bought a few [Bea & Baby] 45’s during his lifetime, but I got maybe 50 45s, various ones in the catalog.

And I got some business documents that she had. So, it wasn’t complete records by any means, but it was certainly enough to show me how Cadillac Baby operated and the scope of his operation. 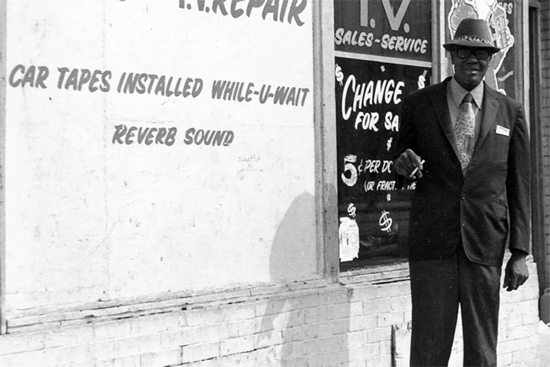 From your perspective, what are the most significant discoveries from among the tracks on the set?

Well, one of the things is I wasn’t full aware of the breadth of Cadillac Baby’s recordings. I hadn’t heard even all of them until I decided to buy the label and then recreate the catalog; that’s mostly what I had to do, with the help of a lot of people who had the 45s that I didn’t have. So that was a big revelation.

Also, hearing the Sleepy John Estes and Hammie Nixon lost session; it had not been heard … at least, not by most people. It wasn’t a professionally done session, I don’t think. It might have been, it seems more like a home tape. You hear Cadillac Baby and other people are there talking, encouraging Sleepy John in the background. So, it was a fun tape and it just verified to me that, yeah, it really includes John and Hammie Nixon.

On that tape was [Cadillac Baby’s] comedy, and also two tracks by [an unidentified] blues band: bass, guitar drum, piano, and vocal. There were no notes on the box or inside the box. That was pretty cool to hear. Just feeling the diversity of the music was pretty exciting.

There was one that was pretty strange, especially, and it was, I guess, a vanity deal. He did two tracks; Thurmon Valentine. Once I really got into working on the box set, I decided to see who I could find who was still alive. So, I searched YouTube, and found some “T. Valentine” recordings he made in New York in the early 2000s. I found his phone number in the White Pages online and reached his daughter, who then put me in touch, who told him that I wanted to talk with him. I ended up going to his house.

His recordings are very strange. He loves blues, but he’s kind of like free association rap, but not necessarily rhyming. Rambling. If you go online, you can find his stuff that he did in 2000. And one of the songs that he did – not for Bea & Baby, but in the last 15 years ago – is “Lucille…Are You a Lesbian?” That’s the name of the song! Another one is about werewolves or Dracula. And if you listen to it, there’s not really any cohesiveness to the storyline or anything. It’s very strange.

But when I met him, he was just like a guy from the South who had moved to Chicago and still had his Southern accent. Just a really down home, very friendly, warmhearted guy who wanted to be a singer, but never really learned how to be a singer.

So, your question earlier, “Was that a commercial consideration?” Well, I would say yes. But was it an aesthetic consideration? No. The T. Valentine record on Bea & Baby record didn’t sell worth a damn, either. In fact, there were a lot of returns on that one.

Yeah, but it just kind of fills in more of the whole story of Cadillac Baby and Bea & Baby Records. I learned more about the artists that I didn’t know anything about. And some of it resonated for me because I recorded a lot of people, some of which were similar deals to [the kind that] Cadillac Baby made. I was operating on those on a higher artistic level than he was, but in working on this box set and hearing all the music, I realized a lot of similarities between Cadillac Baby and me. Like what drove us to do what we did, the reason we started our label. I didn’t start it to get money, because I had given money to musicians just to help them with their lives, which is what Cadillac Baby did starting out. His original reason was because of his affinity and care about musicians and about music.