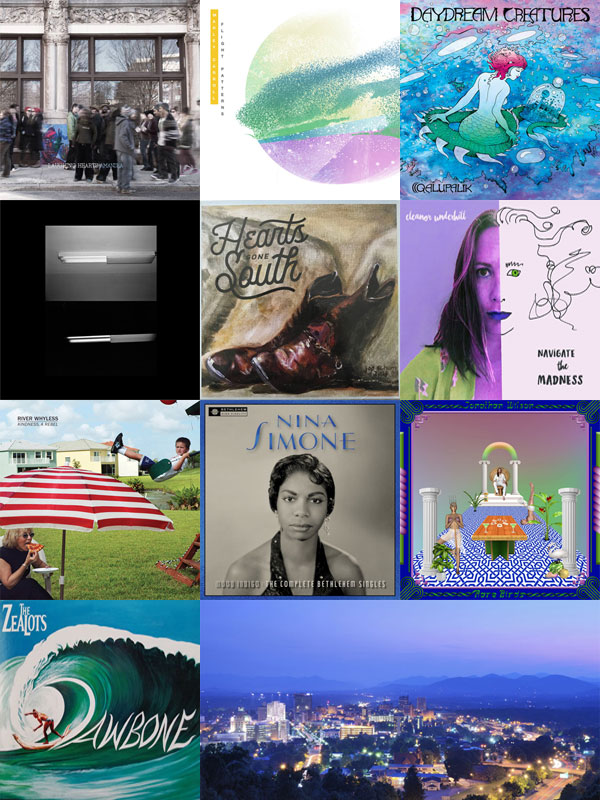 2018 has brought forth a bumper crop of superb albums in every genre from artists local (or with strong connections) to Asheville and the surrounding region. Any of these 10 could arguably claim the top spot, and I can immediately think of at least 10 more that would easily warrant inclusion on the list. The pool of talent here is simply that good. Presented in alphabetical order:

Amandla – Laughing Hearts
Technically, Laughing Hearts had a soft release in 2017, but the vinyl version appeared in 2018. Mixing classic soul, rock and other forms, Claude Coleman (who’s also the drummer in Ween) has crafted modern pop for the ages.

Marley Carroll – Flight Patterns [coming soon; external link for now]
A one-man-band project, Flight Patterns hits the sweet spot between organic and synthesized. While Carroll’s earlier releases were delightfully eclectic, bouncing from one style to another, this one is more fully realized and flows even better.

Daydream Creatures – Qalupalik
It’s actually a delight for critics to discover an act that defies categorization. There are hints of everything from the Andrews Sisters to western swing to psychedelic rock and folk on Qalupalik. And somehow all those disparate elements blend seamlessly into a satisfying whole.

Doc Aquatic – Shadowless Man
The band’s bassist Charles Gately calls the Doc Aquatic sound “psych rock, but with a pop sensibility.” If you enjoy the music of Flaming Lips from before they seemed to run out of ideas, Shadowless Man should be your next stop.

Hearts Gone South – Little Things
The success of albums like Hearts Gone South’s latest may – if we’re lucky – spell the beginning of the end for insipid, focus-grouped bro-country. This is the real deal: honky-tonkin’ country and western, done with commitment and authenticity.

Eleanor Underhill – Navigate the Madness
On her staggeringly superb solo debut, the co-front woman of Underhill Rose shows that her musical ideas are simply too wide-ranging to fit into the context of a single project. The wonderfully eclectic and appealing Navigate the Madness is a triumph.

River Whyless – Kindness, A Rebel
On its third full-length, the group’s early foundation in acoustic folk sounds now coexists comfortably with more modern (and sometimes electronic) textures. And the quartet hasn’t made any compromises to reach this point.

Nina Simone – Mood Indigo: The Complete Bethlehem Sessions
The Tryon-born “high priestess of soul” passed away more than 15 years ago, but this new set collects all of the sides she cut for Bethlehem Records. Better still, it’s sourced from the original master tapes.

Jonathan Wilson – Rare Birds
These days he’s based in California, and travels the world as Roger Waters’ lead guitarist. But Wilson’s Spindale upbringing colors his original music. Rare Birds is the epitome of the rock artist synthesizing influences into something original.

The Zealots – Jawbone
It’s impressive to sustain three concurrent creative careers – visual artist, country musician and rocker – and George Terry McDonald does it in style. Jawbone is topical, intelligent and catchy roots-rock of the highest order.