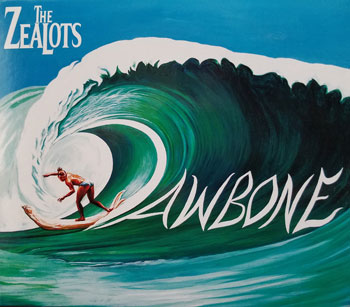 George Terry McDonald is one busy guy. In 2018 – alongside his other creative endeavors as a visual artist – he is releasing not one but two albums of original music. One is Plow, credited to his country/Americana persona, George Trouble; the other is a decidedly more rock-oriented collection, Jawbone, by his band the Zealots. Both are definitely worth a listen, but it’s Jawbone that gets the edge as the most varied and fully-realized of the pair of new efforts from McDonald.

Jawbone is the Zealots’ fourth album; McDonald’s first release under the Zealots’ name was Roar of the Crowd, released two decades ago. Even then, McDonald wedded a rocking, melodic approach to thoughtful (and often topical) lyrics on songs like “Jesse Helms.” At first listen, Jawbone might seem less political than that tune, but listen more closely and you’ll discover that McDonald remains a reliable composer of songs that are, so to speak, “about stuff.”

“Wide Open Spaces” kicks off the album in style, with a fetching melody replete with sweet harmonies (courtesy Amanda Anne Platt) and plenty of peppy mandolin and fiddle. But the tune still rocks, and its good-timing melodic lines are the sly vehicle for a lyric that mentions “fear of random violence” and hearkens back to a time when McDonald admired public servants. That admiration, he sings, “came from profiles in courage,” a nod to JFK.

The Zealots rock harder on “Ceases to Amaze Me,” a barbed-wire cut that suggests a North Carolina version of Alejandro Escovedo circa his Rank & File days. Flat DuoJets’ Dex Romweber – a friend and sometime collaborator – guests on lead guitar.

“Nature Fights Back” swings for the fences, combining an anthemic tune and arrangement with a direct lyrical message; it’s the kind of song that should appeal to fans of Bruce Springsteen. “Poppycock” goes in a very different direction, with a vaguely ska feel that suggests early ‘80s new wave groups. Ben Hovey’s horns adds some wonderful Tex-Mex texture.

The smoldering “Chameleon” has a dark, vaguely sinister feel. The singing and playing become more impassioned as the song unfolds, and Aaron Price’s piano provides a majestic backing for McDonald’s searing and extended lead guitar outro. “Intensive Care” is a wordy (in a good way) song in the tradition of thoughtful lyricists like Graham Parker and Springsteen (again).

The reggae flavor of “Another Head” is effective enough, but – though it showcases McDonald’s mastery of genres – the tune feels slightly out of place in this collection. The wide-screen melodrama of “Chasin’ the Dragon” is reminiscent of Jim Steinman’s songwriting for Meat Loaf. “The Right Prescription” and the slow-burning, Midnight Oil-like “Waste of Talent” dig deeper into McDonald’s lyrical talents; both are superbly-drawn story songs that conjure mental images to accompany the words. And they rock, too.

The rocking continues with the riff-focused but lyrically oblique “Somebody’s Gotta Pay,” a tale of malaise that pointedly doesn’t provide any easy answers to the questions it poses. After those heavy tunes, “Someday” seems absolutely poppy in its execution. The strains of Americana that inform McDonald’s writing shine through in a rock context here, calling to mind Dave Alvin’s solo work. Again, Price serves as an effective foil, with fervent harmony vocals.

McDonald explores the gruff lower end of his vocal range on the moody “The Cruel Truth.” Musically the tune is a minor-key surf rocker, but as always with the Zealots, there’s plenty more if one looks under the hood of the sleek and powerful machine.

Jawbone concludes with George Terry McDonald’s take on the Samson and Delilah myth of the Bible’s Old Testament. Some of the lyrics lie beyond this reviewer’s understanding (“Microphone cocktails in your hand / The value of shock expands”) but – like everything else on this consistently impressive album – McDonald sings it like he means it, and that’s enough.