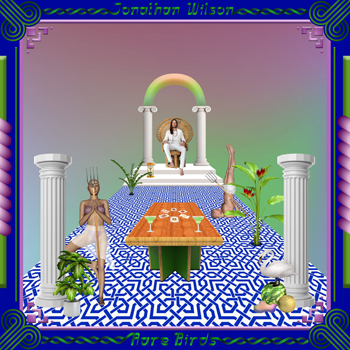 Jonathan Wilson is a son of Western North Carolina. Born in Forest City and raised in the tiny town of Spindale, Wilson came from a musical family. By the late 1990s he was in a band called Muscadine, and signed to Sire Records; the group released three albums before disbanding. Settled in California’s Laurel Canyon, Wilson went on to a successful career as a producer; his credits include albums from Dawes, Father John Misty, Roy Harper and Conor Oberst, among others. Beginning in 2007, Wilson began releasing albums under his own name as well.

But it is his most recent list of credits that has catapulted Wilson into the spotlight. Former Pink Floyd bassist and lyricist Roger Waters picked Wilson to play guitar and keyboards on his first new rock album in decades, 2017’s Is This the Life We Really Want? And once those sessions were complete, Wilson continued his association with Waters, serving as musical director for a world tour.

While Wilson’s earlier material filtered his love of FM radio-style rock of the 1970s though a singer/songwriter sensibility, his sixth album, Rare Birds, finds the multi-instrumentalist fully immersed in those classic rock textures.

In fact , after a quick drum flourish, Rare Birds‘ “Trafalgar Square” opens with a glacial, two-chord space-rock intro that would be right at home on Pink Floyd’s 1975 release Wish You Were Here. Wilson isn’t lifting melodies from Waters, Wright, Mason and Gilmour, but he conjures the heady Floyd vibe in note-perfect fashion. There are even bits of crackling found-sounds in the mix – telephone beeps and whatnot – that will conjure memories of late ’70s Floyd.

That introduction is a bit of a red herring, however: “Trafalgar Square” shifts gears into a wholly different melody for a few bars, and than changes yet again, progressive-rock fashion Once it settles into its main section, “Trafalgar Square” sounds like nothing so much as Norman Greenbaum’s 1970 hit single “Spirit in the Sky,” channeled through production values that recall Alan Parsons. But for all of those throwback touchstones – right down to a female chorus that explicitly references Greenbaum’s tune – the melody and lyrics are completely Wilson’s.

A whispery vocal guides the listener through the mellow, piano-centered “Me.” The tune suggests Gary Wright’s work circa “Dream Weaver,” with welcome hints of 10cc’s melodic foundation. The influences that inform “Over the Midnight” – one of the strongest tracks on Rare Birds – are harder to pin down; the song has a timeless air, with only the subtlest hints of 1980s synthpop.

The shimmering “There’s a Light” weds insistently strummed acoustic guitars, soothing female backing vocals and pedal steel guitar to a soaring and uplifting melody; the call-and-response treated vocals are breathtaking. The quiet, contemplative “Sunset Blvd.” features the sort of lyrics and melody that will appeal to fans of Jackson Browne. The classical instrumentation that adorns the song’s second half suits the song’s mood perfectly.

The title track of Rare Birds features Greg Leisz’s keening slide guitar; were it not for Wilson’s distinctive and lovely voice, the track could be mistaken for a great lost Neil Young tune. The dark, anguished “49 Hairflips” is built around Wilson’s voice and piano; there are other instruments present – synthesizers, lap steel – but for most of the song they’re all dialed down to the point of near-inaudibility.

“Miriam Montague” is a baroque-pop pastiche a la the Left Banke (of “Walk Away Renee” fame); myriad keyboards and sawing cellos effectively evoke thoughts of 1967’s fabled “summer of love.” “Loving You” features haunting guest background vocals from Joshua Tillman (better known as Father John Misty); it has a soulful feel not unlike some of the best work from artists like Robert Palmer and Hall & Oates.

“Living With Myself” is the most sparingly arranged track on Rare Birds, but even though the slightly under-developed melody is possessed of a solitary, inward-looking air, the arrangement draws the listener into Wilson’s world. “Hard to Get Over” makes full use of sequencers and drum loops; the end result has a feel reminiscent of Tears for Fears, showing that Wilson’s musical influences – or at least the ones he chooses to put on display – extend well beyond the 1970s.

“Hi Ho the Righteous” is a delightful musical left turn; with a sound straight out of Bakersfield country-rock, the tune’s clippety-clop rhythm and catchy pedal steel guitar textures create a feel quite different form the other album tracks; it’s a credit to Wilson’s creative vision that the track still sounds right at home on Rare Birds.

The album closes with “Mulholland Queen,” one of many tracks on the album with lyrical images referencing Jonathan Wilson’s adopted home of Los Angeles and its environs. Wilson’s crystalline piano and weary-sounding voice end Rare Birds on a melancholy note, one evocative of Big Star’s “Holocaust.” As the song (and album) nears its close, the cellos swell, creating a lump-in-the-throat feel to conclude Jonathan Wilson’s most full-realized effort to date.

It’s a rare bird indeed who can combine the subtlety of a singer/songwriter approach with the sweeping vision of 1970s album rock, and then present it all in a manner that – while it draws unabashedly from the past – is timeless in its appeal. With his latest album, North Carolina-born Jonathan Wilson has shown himself to be just such a creature.