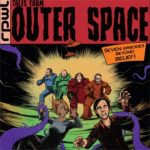 German keyboardist/vocalist Yogi Lang first encountered guitarist Karlheinz “Kalle” Wallner in 1988 when the latter was playing in a band called Incubus. Eventually renamed Violet District, the group released its sole album, Terminal Breath in 1992, with Lang producing. Based 40 km north of Munich in Freising, that group met with only modest success, disbanding
Read More
Though it might seem otherwise to the casual observer, the term krautrock is neither pejorative nor disparaging. In its classic sense, the label refers to improvisationally-based rock with spare musical foundation. As the word suggests (in an undeniably gauche manner), the form originated in Germany. When one thinks of krautrock, bands that often come to
Read More
Continued from Part One… Bill Kopp: From the beginning, RPWL has always sung its lyrics in English. I assume that is because English is more or less the language of pop and rock music, and you can be better marketed that way. (Foreign-language music almost never gets played in the USA, for example.) But to
Read More
Freising, Germany-based RPWL came together in 1997, initially as a Pink Floyd cover/tribute band. But the group quickly moved beyond the limitations of covering Floyd, creating their own original music in the process. Since their debut, the group has release twelve albums (three of those live albums); their latest is Wanted. Despite their accessible, melodic
Read More
The last time anything truly new was released underneath the Pink Floyd banner (not counting expanded reissues of 70s albums) it was way back in 1994. That was almost twenty years ago. So if a newer band puts out music that strongly echoes (heh) the Floyd, the argument can be made: hey, nobody else was
Read More