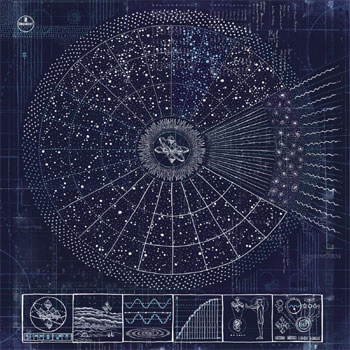 Despite what some stuck-in-the-past nostalgic types might assert, there’s plenty of good (and sometimes even great) music being made today. The best artists still find ways to offer up something new and fresh, even while working within a particular musical idiom (rock, blues, jazz etc.). Some take the approach of combining, synthesizing or hybridizing genres; that approach has brought forth important music in folk-rock, soul-jazz etc. And more recent genre mashups have given us trip-hop and the (perhaps only occasionally interesting) rock/hip-hop hybrid.

A new (to me, at least) London-based trio called The Comet is Coming doesn’t exactly fuse disparate genres; what they do is too richly complex to be described so easily. But the music on the group’s third and latest album Hyper-Dimensional Expansion Beam is a heady admixture of styles that sounds and feels like nothing I’ve heard before. Perhaps the same is true for you.

The handiest way to describe The Comet is Coming is to note that the group’s original, all-instrumental music draws upon hip-hop and electronic textures for both its foundation and its well-placed musical adornments, but that the core of the music is jazz. Soul-jazz? A little. Free jazz? Some, to be sure, but as a whole the music is rooted in melodic accessibility. The trio is a bit inscrutable, with shadowy press photos and whatnot. But that approach feels right: the relative anonymity of the members – each with his own stage name – guides listeners to focus on the music itself.

The album opens with “Code,” and at first it sounds like space-rock a la Pink Floyd, Things shift quickly into bleating, synth-based EDM (courtesy Danalogue), but then saxophone (Shabaka) comes into the mix, pulling the music in a jazz direction. There are lots and lots of synthesizers (both vintage and modern) in the mix, but a live drummer (Betamax) anchors the music in an organic character. You won’t find any stringed instruments – no guitar, no basses – anywhere on this album. And you won’t miss them, either.

The songs tend to start with just one or two elements, layering additional sonic components as the pieces build toward a crescendo. That approach is employed in so many different ways that it never gets old, never fails to intrigue nor engage. Sometimes the music is atmospheric (“Frequency of Feeling Expansion”), and other times – as on “The Hammer” – it’s heavy, almost bluesy (but definitely not blues). Some cuts are dark and menacing (the hypnotic and aptly-titled “Angel of Darkness”) while others are dizzying numbers that suggest some intergalactic rave with some very powerful drugs in the mix (“Atomic Wave Dance”).

In short, The Comet is Coming has enough musical touchstones to provide new listeners a few handy sonic reference points. But once those are established, it’s off to the cosmos. If Sun Ra were making music in 2022, it might sound something like The Comet is Coming. But he isn’t and they are, and adventurous listeners should be grateful.

I’ll be mentioning this group, this album again before the year’s out. Later this week, in fact.