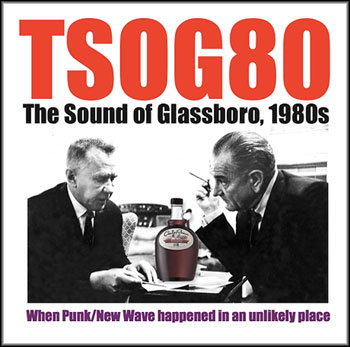 The reductive nature of popular culture dictates that when we recall the 1980s, we’re supposed to think of shoulder pads, big hair and vacuous MTV-era acts like Thompson Twins. But as those of us who came of age in that era know, the ‘80s also saw the ascendancy of punk and new wave and the emergence of what would come to be known as “college rock.” Standing apart from the lowest-common-denominator, focus-grouped radio programming of commercial radio pioneered by Lee Abrams, college rock offered a true alternative (hence that word) in the form of edgier and more experimental music.

Seemingly, every city had its own music scene in those days. Athens, Georgia certainly did, giving rise to R.E.M., B-52s, Pylon and other greats. I lived in Atlanta, and we had Swimming Pool Q’s, LMNOP, The Producers and the Georgia Satellites. And San Francisco had a scene with indie label 415 Records it its epicenter. (Hey, I even wrote a book about it.)

But other cities had theirs as well. Oftentimes the linchpin of a scene was the local institute of higher learning. South of Philly in New Jersey was Glassboro State College. Patti Smith attended there in the late ‘60s, and a decade-plus later, the punk spirit remained very much alive there. One student, Joe Callahan, started out as a prog fan but was turned onto the new music by friend and classmate Edson Atwood.

Callahan soon relocated to the Bay Area and started a band called The Pop-O-Pies; if you’d care to know the rest of his story – and it’s well worth knowing – I’d humbly refer you to Chapter 29 of Disturbing the Peace: 415 Records and the Rise of New Wave as a starting point. For his part, in those days Atwood had a punk band of his own, Eddie Estrogen and the Hormones.

Glassboro was home to several other bands of note, they collectively represented a good slice of what was happening in the area’s college rock / alternarock / new wave / punk scene at that time. Bands like The Whirling Dervishes, Free Food, The Cheesdogs and Chowderheads may not have sounded like one another – Atwood’s band was nervy, speedy punk while The Dervishes leaned in more of a catchy new wave-ish direction, The Chowderheads sound a bit like Jazz Butcher Conspiracy, and Callahan’s group was just kinda weird – but what they all shared was a disaffection with regard to the mainstream and a desire to take things on a more individualistic, less commercial path.

Nearly all of these bands would remain unsigned, and none was destined for the big time. But they achieved some regional success; Estrogen played Max’s Kansas City in NYC, for example. Th music these bands made was worthwhile, and remains so. And you need not take my word for it: Atwood has compiled 17 tracks featuring songs from all of the aforementioned bands (plus an aircheck/commercial that helps ground things in then-and-there) in a collection called TSOG80: The Sound of Glassboro, 1980s. The sound is appropriately dodgy and inconsistent, and it’s guaranteed to take you back to the early ‘80s whether you were there in the first place or not.

Highly recommended, it’s available direct from its curator for the eminently reasonable price of $20 postpaid at this link: https://edsonatwood.wixsite.com/website/sounds-1 Tell him I sent ya.