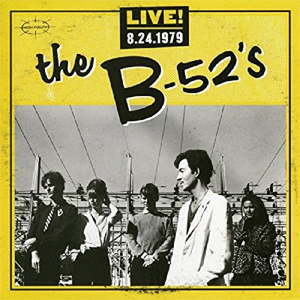 File next to: DEVO, the Go-Go’s

Though they were unashamedly gimmicky, the B-52’s were also among the most refreshing of the so-called new wave groups. With a proudly tacky aesthetic that emphasized fun above all else, the Athens group turned out a short series of classic albums. Their first two – 1979’s self-titled debut and Wild Planet from 1980 – are essential parts of any collection of new wave era albums. And now there’s an addition to that collection: this live album documents an August 1979 show recorded in Boston a mere three days before Wild Planet was released. Originally recorded for radio broadcast, Live 8.24.1979 captures the silly fun and excitement of the band, and proves that they were quite the tight and energetic live act, too. At 9 songs (6 from The B-52’s and 3 new ones) it’s a bit short, but the B-52’s trump quantity with quality.