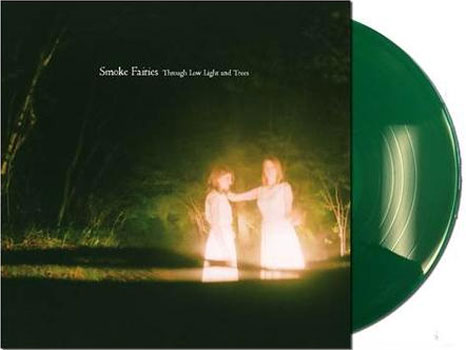 In early 2020, thanks to the good graces of a kind music publicist, I received a copy of Darkness Brings the Wonder Home, the 7th album from British folk rock band Smoke Fairies. I was duly impressed with the record. As I noted in a review posted in March of last year, the band creates “original music that’s steeped in the folk and blues tradition, yet they don’t sound derivative.”

That was my first exposure to the band, and as much as I enjoyed Darkness Brings the Wonders Home, I never got around to exploring Smoke Fairies’ back catalog. Now in late 2021, another album has landed upon my desk: Through Light and Low Trees. The LP package did not include a one-sheet (industry parlance for a bio and marketing bulletin, often sent by labels or publicists to reviewers), so initially, I mistakenly thought it was the band’s latest release.

In fact it’s their 2010 “debut album” (though there was an earlier, independent release four years earlier). And mere seconds into dropping the needle on Side One’s opener “Summer Fades,” it became obvious to me that for thir major label debut (that’s how best to describe it), Katherine Blamire and Jessica Davies burst out with a fully formed musical concept.

Crystalline vocal harmonies and a gentle (but not boring or underdeveloped) acoustic-leaning backing conjure images of Sandy Denny, Fairport Convention and (of course) the gentler, mystical corners of Led Zeppelin’s fourth, untitled album. “Summer Fades” is jaw-dropping in its sonic beauty, in its careful, understated power and majesty. The band sounds as if it’s well into its third album, full of confidence in what they’re doing and with nothing to prove.

And the opening track proves to be no outlier. “Devil in My Mind” is sonically consistent, but it’s quite different from the ground up. The two group leaders (and guitarists) continue to make the most of their vocal blend, but the other musical components – bass, drums and all-important viola – work together to create a backing that’s stunningly beautiful.

And so it continues. Smoke Fairies’ immersion into the British/European folk traditions informs the band’s musical approach to a significant degree, but these timeless tunes aren’t Renaissance Fair material. The songs are full of mystery and nuance, drawing the listener into Smoke Fairies’ world in the most effortless fashion possible.

The group adds a bit of Merseybeat jangle to the mix on the sublime “Hotel Room.” But in Smoke Fairies’ capable hands, those textures are fully assimilated into their existing musical framework, so the song doesn’t sound like a pastiche. “Dragon” is spooky drawing room piano and vocal. “Erie Lackawanna” features subtle twelve-string picking and near-whispered vocal harmonies. It’s the kind of music that makes the listener lean forward so as not to miss anything.

“Strange Moon Rising” heads to the Mississippi Delta for its vibe. Blamire and Davies’ ghostly twin lead vocals are spellbinding, especially against the hypnotic instrumental backing and somnolent slide guitar.

Smoke Fairies’ use of studio technology is a model of subtlety, never calling attention to itself. But whatever studio effects that the group does employ are peeled away – or at least dialed back to the point of serving as subliminal elements – on the contemplative “Morning Blues.” The song underscores the sonic variety that exists within Smoke Fairies’ well-defined musical approach.

Neil Walsh’s viola is a key ingredient in “Storm Song,” a tune that makes the most of dynamics, alternating quiet/loud, gentle/briefly forceful. The mix of those textures is seamless and brilliantly executed. “Blue Skies Fall” brings back the electric 12-string, with a cyclical riff that weaves a musical spell around the listener. The rhythm section’s understated support is a model of subtlety, and highly effective.

“Feeling is Turning Blue” is an impressionistic piece, eschewing percussion and letting the implied beat move the song along. (The liner notes credit both Blamire and Davies with “rhythmical organ sounds.”)

(A quick word about the packaging: The sturdy sleeve with moody-evocative artwork and inner picture sleeve is a thing of beauty, as is the translucent green vinyl pressing.)

This vinyl reissue of Through Low Light and Trees closes with “After the Rain” a simple, unadorned guitar and the duo’s vocals. The wordless harmonies the anchor the song’s second half beckon the listener to remain in Smoke Fairies’ world. I, for one, am convinced.