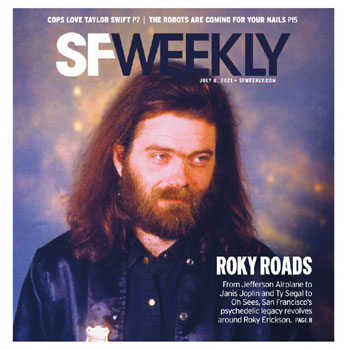 But Luckin “couldn’t find any commercial American label that wanted to put this guy out,” says Chris Knab, co-founder of San Francisco-based independent label 415 Records. Selecting songs from the UK release and adding five other tracks from the sessions, 415 released the music as The Evil One in 1980. Taken together, Erickson’s recordings from that period are hailed among his best work.

In the late ‘70s, Barry Simons ran a popular North Beach nightclub, the Back Dor. And Simons—who considers The Evil One one of the greatest records of all time—says that he booked Roky every chance he got. “I was basically cherry picking all the best bands from the Mabuhay Gardens and other places,” he says. “Roky was one of the really important ones. And I could get any of the best bands in town to support Roky, because they all wanted to be on the bill.”

Roky would go on to make some additional recordings in the coming years; flashes of his brilliance showed up in the lyrics and the playing. But his mental health issues persisted, as did his run-ins with the law. He was arrested on mail theft charges. “Roky did take his neighbor’s mail,” says Bentley, who had become friends with Erickson in the mid 1970s. “But he taped it to his wall unopened. He did not open their mail! He just liked getting mail. When he’d get cards – ‘Join this,’ ‘Join that’ – he would send them all in. I think it was his security blanket.”

Things got somewhat better for Erickson in the ‘90s and beyond. His youngest brother Sumner was named as Roky’s legal guardian; he helped get the musician’s affairs in order. In 2005, Roky was the subject of a well-received documentary, Keven McAlester’s You’re Gonna Miss Me. That same year, Bill Bentley was executive producer of a career-spanning compilation release, I Have Always Been Here Before: The Roky Erickson Anthology. Erickson rallied and got back to playing live; a 2007 performance at the Ponderosa Stomp Festival in New Orleans was a high point. Roky recorded a new album, 2010’s True Love Cast Out All Evil, with Okkervil River. And he toured to wide acclaim with acolytes The Black Angels in 2014.

Bill Bentley has plenty of experience putting together heartfelt tribute albums. He was the executive producer for a set honoring San Francisco’s own Skip Spence, 1999’s More Oar: A Tribute to the Skip Spence Album, and he oversaw similar projects in tribute to Doug Sahm, O.V. Wright and others. As with those projects, the subjects of tributes may not have been household names, but they counted many revered artists among their most ardent fans. 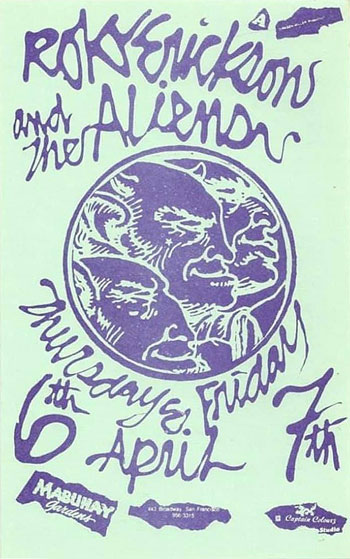 Image from the collection of Dwayne Mileham

And that meant that when Bentley put out the call for what would become May the Circle Remain Unbroken, he easily and quickly found willing contributors. Wilco’s Jeff Tweedy, Lucinda Williams, Ty Segall, Mark Lanegan and Margo Price celebrate Roky’s music on the tribute album with their versions of songs from his catalog. Along with The Black Angels, fellow Texans paying tribute to Erickson on the new album include Charlie Sexton (with The Kills’ Alison Mosshart) and Gary Clark Jr. And the greater Bay Area is represented by recordings from Chelsea Wolfe and Brogan Bentley.

“There’s something going on with Roky’s legacy,” Bentley believes. “I was shown that by talking to young bands. In some ways, there’s more interest than the first [tribute album].” And those who weren’t able to participate sent their regrets. “There was interest from Metallica,” Bentley says. But for scheduling reasons, they weren’t able to take part. The 12 songs on the album – and the variety of participants – nonetheless demonstrate the breadth of Erickson’s influence.

Roky’s physical health had been a longtime concern. Bill Bentley recalls seeing him onstage in April 2019 at The Chapel in San Francisco; Roky was there to perform The 13th Floor Elevators’ 1967 album, Easter Everywhere, in its entirety. “He was sitting down, kind of remembering most of the lyrics, but he was having trouble breathing between songs,” says Bentley. “This overwhelming spirit came over me, and it told me, ‘Roky’s leaving.’”

Bentley says that toward the end of that performance, when Roky played “Postures (Leave Your Body Behind),” that feeling hit him even more forcefully. “I left that show that night with my oldest boy, and I said, ‘We have to do another tribute record for Roky, because I don’t think he’s going to be here much longer.”

One month after Bentley saw Roky on stage at The Chapel, Erickson was gone. Bentley kept working on the project, working an arrangement with Matt Sullivan’s Light in the Attic Records for a single-disc release on Record Store Day 2021. That label had reissued Roky’s The Evil One album in 2013. Bentley says that for Sullivan, “it was spiritual to honor Roky’s memory.”

Bentley reflects on the legacy of Roky Erickson. “You know, for somebody who really did almost lose it all, he never quit trying,” he says. “I look at that life, and I think, ‘Man, it would’ve been so easy for him to just shut it all down and quit,’ But he never did, man. He always came back.”

An edited version of this feature appeared in SF Weekly. A more in-depth exploration of The Evil One is featured in my upcoming book, Disturbing the Peace: 415 Records and the Rise of New Wave, due later this year from HoZac Books.