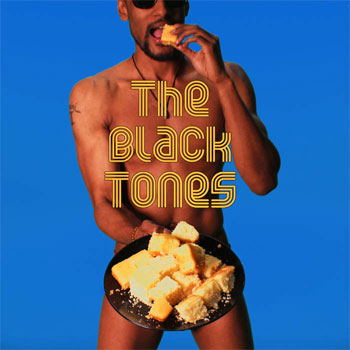 Ice-T (among many others) has long made the point that African Americans’ role in the creation of rock ‘n’ roll doesn’t get the recognition it deserves. While I agree, I suspect that in part the reason for that is that comparatively few people of color work in the rock idiom. I recall vividly just how remarkable the Bus Boys seemed when they (briefly) broke out in the early 1980s. For the most part, rock is (and has been) viewed as the domain of white males.

Of course that’s wrong, and it ignores the contribution that women and nonwhite artists have made, and continue to make. But it’s always helpful in this regard to be able to point to a handy example. And with the Black Tones, we have just such an act.

Siblings Eva Walker (guitar, vocals and – in the studio – other instruments) and Cedric Walker (drums, backing vocals) are the Black Tones. Southerners (Louisiana-born, specifically) based in the Pacific Northwest, the Walkers play high octane rock with a healthy dose of funk sensibility. While “Ghetto Spaceship” is the most well-known track on the duo’s debut LP Cobain & Cornbread, “The Key of Black (They Want Us Dead)” is in many ways a more apt distillation of the qualities that make the Black Tones special. Largely instrumental, it’s built around an insistent bass riff and assured guitar soloiong. When the call-and-response vocal comes in, it’s reminiscent of Parliament Funkadelic.

But the minimalist approach of the Black Tones – think “power trio,” though live it’s just the two of ’em – keeps things primal and rockist. The Walkers have a sense of humor, as evidenced on tracks like “Mama! There’s a Spider in My Room.” Eva Walker wails while churning out a heavy broken-chord riff. Brother Cedric lays down rock-solid percussion; his approach is to do less and make it feel like more.

The brooding, sinister bass figure that kicks off “Chubby & Tubby” is joined by a splashy yet understated drum part. Then Eva’s wiry guitar part comes in, sounding very much like the Doors’ Robby Krieger. It’s a full two and a half minutes before vocals come in, and then only to chant/count to eight. In the song’s second half, Eva opens up on guitar, all fire and fury. The solo isn’t math-rock technicality; far from it. Instead, it’s full of feeling and finesse, which in the end is closer in spirit to the primal rock ‘n’ roll upon which the music is built after all.

“River of Jordan” is a departure, and were it the only track you heard off Cobain & Cornbread, you’d have a very different impression of what the Black Tones are about. Knee-slap percussion, breathy blues harp and field-holler-styled vocals are the ingredients for this gospel blues shouter. Though a musical outlier, in the context of the album as a whole, it fits.

But the heavy rock of “Plaid Pants” is more representative of the Black Tones’ core aesthetic. Eva’s sexy, swaggering vocal delivery belies the fact that she’s a guitarist; she sounds for all the world like a commanding center-stage singer with a mic and an intimidating presence that creates plenty of clear space around her. Just saddle an electric guitar onto that mental image and you’ve got it. The wordless, chanting vocals and subtle use of electric organ on the song’s second half create a hypnotic effect. 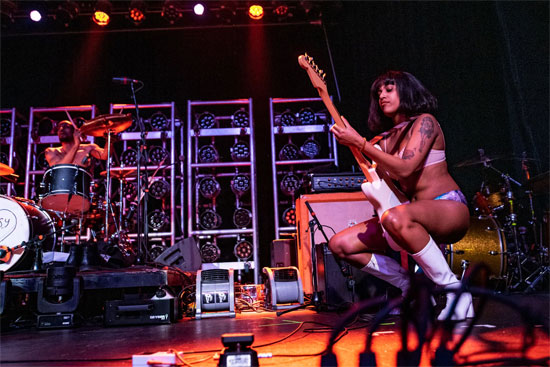 Another left-turn is “Striped Walls.” Here Eva Walker plays clawhammer banjo and adopts a vocal tone that has more to do with the Appalachian musical tradition. Cedric’s stomping accompaniment brights the arrangement. And even though the tune feels like Americana, electric bass and organ pull it gently back in the direction of rock and/or pop. The Walkers so effortlessly demonstrate their mastery of the style that it’s not at all difficult to imagine them making an entire album of Americana, taking a place right alongside Dom Flemons and Rhiannon Giddens and making the point that folk/Appalachian music isn’t the sole province of white folks, either.

The comparatively brief (eight-song) Cobain & Cornbread ends with “Welcome Mr. Pink.” Shades of Led Zeppelin make themselves evident through the song’s churning power, and the spirit of B.B. King (play-then-sing, never both at once) informs the song as well.

As fine a debut as can be imagined, the Black Tones’ Cobain & Cornbread is getting buzz beyond what one might expect for a self-released record. But the Walkers have earned all of the recognition and praise. I look forward to following their future endeavors.