A Look Back at the Tubes’ ‘Remote Control’ 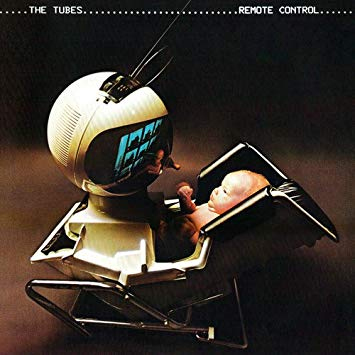 The Tubes were among the most outrageous of 1970s rock groups. With an impressively muscular and underrated instrumental foundation, the group – or at least lead singer Fee Waybill – acted out the band’s bizarre tunes live onstage. Songs like “White Punks on Dope,” “Don’t Touch Me There” and “Mondo Bondage” were clever to begin with, but when dancers, props and play-acting was added to the equation, it all went right over the top.

In 1979 the group teamed up with wunderkind producer Todd Rundgren to make its fourth studio release, Remote Control. Working closely with the band, Rundgren did what he would do several years down the line for XTC on their Skylarking LP: he shaped and sequenced the group’s original material into something resembling a narrative, in this case one about television culture. This time around, the Tubes had come up with a bunch of excellent material; Rundgren’s input only improved things.

“Turn Me On”
Opening with a bleating analog synthesizer, the tune sets the mood for the hard-charging yet new wave-leaning album. A memorable melody and an insistent performance showcase a streamlined band that still focuses on dramatic presentation. The group always excelled at sly (if not always subtle) double-entendres, and the line “put your hand on the power” is certainly an example of that.

“TV is King”
An even more memorable synthesizer line (courtesy of Mike Cotten, one of the band’s two keyboardists) kicks off the most pop-oriented tune on Remote Control. “TV is King” also sports some of the album’s most incisive lyrics, skewering the vapidity of TV culture – and American’s obsession with it – in a way that’s more relevant than ever today. But as always, the Tubes apply humor to their social commentary.

“Prime Time”
The third song on Remote Control (and the third to open with synthesizers out front), “Prime Time” features vocalist Re Styles taking the lead (there is an alternate video version – featured on the T.R.A.S.H. compilation – that’s a duet between Styles and Waybill). The song’s feel is halfway between Re’s “Don’t Touch Me There” duet and the kind of sleek dance-oriented new wave Blondie was making at the time. The massed backing vocals – a characteristic of the album – are superb, as is the wonderfully textured mid-song synth break. 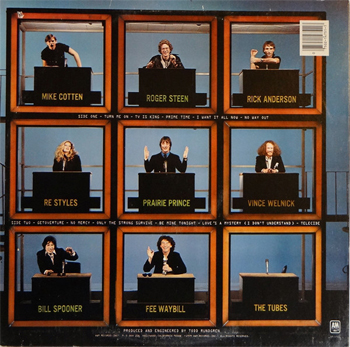 “I Want it All Now”
The nuanced melody of this swinging uptempo number bears the stamp of both keyboardist Vince Welnick and – especially in the resounding, hand-clapping choruses – producer Rundgren. Auxiliary member Mingo Lewis adds subtle splashes of percussion. Some faux-reggae in the song’s midsection seems slightly out of place, but ultimately the song works.

“No Way Out”
Combining a sort of showy Las Vegas sensibility with the urgency of new wave, “No Way Out” alternately soars and pummels along. The stinging guitar fills from Roger Steen and Bill Spooner stand out on what so far has been a keyboard-focused set of songs.

“Getoverture”
Side two of the original vinyl LP is introduced with a grandiose instrumental, one that ties together most all of the album’s musical themes in thrilling fashion. “Getoverture” showcases the band’s rarely-remarked-upon progressive rock side, as well as its knowing way with vocal harmonies. Drummer Prairie Prince gets his moment to shine as well; the sound of what may well be a circle saw joins a Welnick piano break, with the guitarists joining in. It’s no surprise that this tune would become a staple of Tubes live shows.

“No Mercy”
“Getoverture” segues straight into the stomping, Broadway-ish “No Mercy.” Essentially a blues – a style in which the Tubes rarely trafficked – the tune doesn’t fit smoothly into the album’s supposed narrative, but it’s effective, especially the round vocal parts.

“Be Mine Tonight”
With all the elements of a successful single, “Be Mine Tonight” displays the Tubes’ virtues: witty lyrics, a memorable chorus, soaring harmonies and an insistent melody. The song wouldn’t have been out of place on a Utopia album of the era. Rick Anderson’s bass work provides a solid groove that anchors the song, and a dramatic bridge adds intrigue and texture. 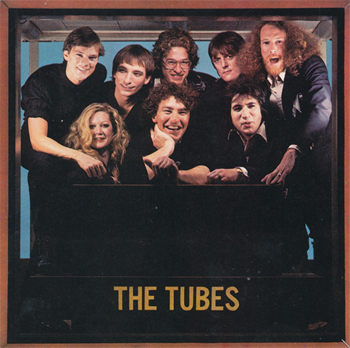 “Love’s a Mystery (I Don’t Understand)”
The era of the power ballad had yet to dawn when the Tubes cut “Love’s a Mystery,” but the romantic song ranks as one of the band’s finest moments. It’s very much of a piece with “Don’t Want to Wait Anymore” from the band’s 1981 Capitol album The Completion Backward Principle. Rundgren’s melodic input is at its most overt here. In a just world, this is the song that should have pushed the Tubes into major-league success. If Remote Control had ended with this song’s fadeout, that would have been enough.

“Telecide”
Instead, the album closes with this tune, a kinetic, edge-of-mayhem number that features Fee Waybill screaming and then shouting, spitting out laundry-list lyrics, presaging “Mr. Hate” from Completion. The band – especially Welnick – is firing on all cylinders. Re Styles deadpans, “I used to know him; he seemed like a regular guy.” If one can imagine punk made by a top-notch band with a flair for the dramatic and a desire to showcase its instrumental ability – think Roxy Music with Johnny Rotten on lead vocals – then “Telecide” would be an exemplar of that aesthetic.

An brief, unlisted reprise of the theme from “Love’s a Mystery” (done “Getoverture” style) closes the curtain on Remote Control.

Critics of the time were unsure what to make of Remote Control; it received mixed reviews, though the album has gone to be recognized as a classic. For their part, A&M dropped the Tubes shortly after the album’s release; once the Tubes signed with Capitol, they’d achieve the commercial success that had eluded them.