Ian Anderson: System Latency and the Opportunities of Multimedia

British Progressive legends Jethro Tull have been around in one form or another for nearly half a century. From 1967 until now, the group’s mainstay has always been Ian Anderson: as songwriter, singer and flautist, Anderson has long cut a distinctive figure. His trademark standing-on-one-leg flute solos accent the band’s reliably high-energy performances. Even today at age 69, Anderson still leads the current lineup of the group through projects that combine new and older music.

These days Jethro Tull is best thought of as a concept rather than a band; shows are billed as “Jethro Tull by Ian Anderson.” Anderson’s most recent studio project is a collaboration with the Carducci Quartet, Jethro Tull: The String Quartets. Re-imagining a dozen Jethro Tull songs in a classical-styled format, the album explores the nuances that have long existed in those songs, while removing the tunes’ rock and roll components. As far back as 2005 Anderson merged favorites from the Jethro Tull catalog with classical trappings. 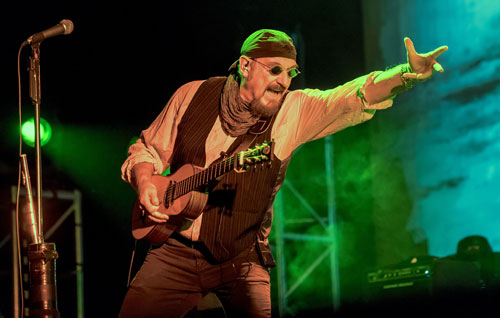 But for most dates on the current U.S. tour, it’s back to a rock format. Anderson’s arranger and orchestral leader for various projects is longtime associate John O’Hara; O’Hara doubles as the keyboardist in Anderson’s band. Anderson and O’Hara are joined by three other musicians – the standard rock lineup of guitar, bass and drums – and the accomplished ensemble sinks its musical teeth deep into the music of Jethro Tull.

Anderson has always aimed to provide audiences with high value for their concertgoing dollar. In 2017, that means an impressive multimedia component to the shows. “More and more,” Anderson observes, “audiences have grown to expect something more than just a bunch of distant bodies on the horizon wearing T-shirts and jeans.” And he’s quite happy to oblige; he views that reality as “an opportunity, rather than some kind of penance to suffer.”

Multimedia technology allows Anderson’s show to “express visually an accompaniment to the music,” he says, “and sometimes that is quite abstract and gentle.” Sometimes that’s achieved through creative lighting, controlled by an off-stage lighting director. Other times it’s more direct and literal. “In a couple of places I have a guest vocalist who pops up and sings a few lines in a song.” That provides interest, and sometimes allows the vocalist to play a character in a lyrical fashion, giving added life and dimension to songs like “Aqualung,” “Living in the Past” and “Locomotive Breath.” And big-screen video projection finds its way into the performance at key moments.

But Anderson stresses that all of these extras (beyond him and the band itself) are what he calls “benign illustration. It’s not as if somehow we are accompanying a video; we try to keep it the other way around. A video is just an additional visual effect.” Theatricality has long been a key component to the music of Jethro Tull, especially in the context of a live concert, Anderson says, rather than “just straight-ahead walking on the stage and playing the music.”

One thing Ian Anderson strives to avoid is the now-popular practice of projecting close-up shots of the musicians onstage as they play. That decision is based on a very practical concern. “The time lag between the camera recording the action on stage and it appearing on the screen can be half a second or even more,” he explains. And that presents a real problem, because the result is a visual and auditory dissonance. And that’s not an effect most bands are going for.

Describing the limitations of high-definition video in a concert setting as an inevitable “system latency,” Anderson provides a specific example of just how badly things can go wrong. “I was at [another well-known band’s] concert a few weeks ago, and the delay with the on-stage cameras was so much that it actually had got so far out that it looked like it was in time again. It looked as if the drummer was playing on the off beat!”

With a wry chuckle, Anderson adds, “You won’t find that at our concerts.” For the Jethro Tull by Ian Anderson concerts, onscreen images are synchronized. “And our drummer, God bless him, is having to follow a time code,” Anderson explains. “And we play with him.”