Album Mini-review: The Roaring 420s – You Can’t Get Out Alive 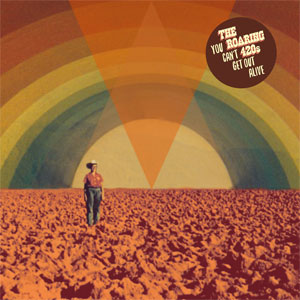 For The Roaring 420s, everything old is new again. Across the twelve songs on *You Can’t Get Out Alive – their second full-length – this Dresden, Germany based quintet crafts original songs that bear more than a whiff (or a toke if you like) of late 1960s psychedelia. Go-go combo organ (think of The Doors or ? and the Mysterians) and twangy, reverbed guitars all endeavor in the service of the snappy tunes. Florian Hohmann betrays not a hint of a German accent – in fact he sounds more like Tom Verlaine, or an uncharacteristically upbeat Lou Reed – as he sings the collectively written groovy tunes. “Hey Lou” sounds like a rocked-up rewrite of The Velvet Underground‘s “After Hours” (or the pop interlude from The Mothers‘ “Brown Shoes Don’t Make It”) with better vocals and electric twelve-string straight out of A Hard Day’s Night.