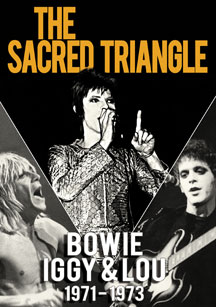 Don’t be put off by the breathless, overselling and somewhat pretentious title. The Sacred Triangle: Bowie, Iggy & Lou 1971-1973 is a thoughtful look at the convergence of three important musical careers.

The back-story need not be recounted here, especially seeing as The Sacred Triangle does a creditable job of providing the relevant context. Suffice to say that by 1971, David Bowie, Lou Reed and Iggy Pop were not among rock’s most bankable artists. Bowie was grasping, flailing in search of a style (and success). Reed had left the Velvet Underground and made an underwhelming solo album. Iggy was, well, Iggy, with all the mayhem and lack of focus that suggests. But by the tail-end of the subject period, all three had greatly improved their stock, arguably created some of their best music, and set themselves on artistic paths that would reap benefits for years to come.

The basic thesis of The Sacred Triangle is that the careers — and most notably the creative product — of all three of these men benefited greatly from their meeting. The film — through narration, archival footage and interviews — sets out the idea that Bowie helped Reed who helped Bowie, and on and on.

It’s a convincing argument. All three were (and remain, though to a far lesser degree) highly controversial, polarizing figures. But the film leads the viewer through the timeline in which their paths crossed most notably, and shows how each influenced the other in (mostly) positive ways.

As is typical of this sort of production, the selection of interview contributors has a lot to do with the finished product. Here we are afforded the received wisdom of (among others) Bowie’s ex-wife Angela, ex-MainMan executive Leee Black Childers, and Warhol hanger-on Wayne/Jayne County. All of their memories seem to be pretty good, which is a welcome surprise in light of all the activities in which they engaged in those heady, wanton days. Angie Bowie in particular is shown to be a brassy firecracker with a strong point of view and a wit to match.

Balancing entertainment value with a scholarly approach, The Sacred Triangle is an illuminating look at an era of great musical importance, viewed from the specific angle of the interaction of Bowie, Reed and Osterberg. Predictably, it’s not the sort of documentary one is likely to watch over and over, but it’s packed with enough informed commentary and history to make it well worth viewing.