As Jon Auer pointed out in metaphor form during our conversation, speaking of Big Star in a slightly different context, “You can write the greatest letter in the world to someone, but if the postman loses it, or doesn’t deliver it, and no one ever gets it, no one’s gonna know how great it was.”

As it turned out, the Memphis date wasn’t the revived Big Star’s final show; not by a long shot. They continued to perform on and off for more than sixteen years, and even cut an album of new material, 2005’s In Space. 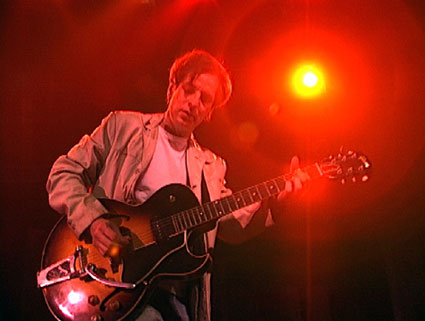 Thankfully, and no doubt in part owing to the success of the earlier box set* and movie**, Omnivore Recordings did — as filmmaker Danny Graflund would say — indeed give a flying fuck. Omnivore has quickly developed a reputation as musical curators: their approach to releases might be described as, “You probably haven’t heard this before, but you should hear it. This deserves your attention.” They do important, eclectic musical work. So now we have Live in Memphis as both a single audio CD and a concert DVD.

The twenty-song setlist as presented on Live in Memphis doesn’t differ significantly from the Columbia set performed and recorded a year and a half earlier, but the songs included here provide a more well-rounded portrait of the “new” Big Star. A faithful cover of The Kinks‘ “Till the End of the Day” reminds listeners of the studio version that was among the in/outtakes from the band’s Third/Sister Lovers LP. And Alex Chilton‘s off-kilter choice of covers is made manifest not only with Todd Rundgren‘s “Slut” and the T. Rex number “Baby Strange,” but with a surprising run-through of Bruce Springsteen’s “Fire,” the bossa nova smash “Girl From Ipanema” (long a staple of Chilton’s solo shows), and the rock’n’roll obscurity “Patty Girl” by Dick Campbell and the Scarlets.

Chilton doesn’t hog the spotlight, though. While his idiosyncratic style all but guarantees that he’d alter the phrasing of his vocal and guitar lines, Auer and Ken Stringfellow take a more faithful approach, following the original arrangements to, um, the letter. The result is an odd juxtaposition: at times, The Posies duo sound more like “classic” Big Star than does Chilton. But when they take the lead vocals – most notably on Chris Bell‘s searing “I Am the Cosmos,” they achieve the feat of both remaining true to the original (and thus honoring Bell, who died in 1978) and making the song truly theirs. And when Jody Stephens takes his vocal turns, his fragile, heartfelt readings of “For You” and “Way Out West” rank among the disc’s most scintillating moments.

Still, Live in Memphis is perhaps not the best place for a Big Star neophyte to begin; such a person would be best served by finding a copy of the (now out-of-print) single-CD set that pairs #1 Record and Radio City (the 2014 individual album reissues add no bonus tracks, and even use the same brief Mills-penned liner note essay in both!). Moreover, Live in Memphis does lack a bit in terms of sound quality: while it’s entirely listenable, it’s only a few notches or so above an audience bootleg fidelity-wise. (Fortunately, and thanks to improvements in consumer technology, audience bootlegs from the 90s onward tend to sound pretty fine.) Still, for the faithful, Live in Memphis is a must-have. And though I haven’t yet screened the companion DVD (sold separately), I suspect it’s even more essential for lovers of Big Star.

Besides, in the wake of Chilton’s sudden death in March 2010, Live in Memphis might just be the final word on Big Star…

No, wait: acclaimed music journalist Holly George-Warren (with whom I shared a cab ride once; file under “brush with greatness”) published a Chilton biography, A Man Called Destruction, earlier this year. Word also is that a Chilton biopic is in development, and then there’s the absolutely wonderful Big Star 3rd series of concert performances: those feature a rotating cast of luminaries, including Stephens, Auer, Stringfellow, Mike Mills and Chris Stamey. Those shows are a living testament to the enduring appeal of the music created by that little band in Memphis who could never seem to find a break during their original existence. “That we’re still talking about Big Star now,” Jon Auer said to me, “is a testament to how passionate people are about this music.”

* Omnivore’s Cheryl Pawelski produced the Keep An Eye on the Sky box set during her time at Rhino.
** Omnivore served as music supervisors and executive producers for the Nothing Can Hurt Me motion picture documentary.