News on a Long Awaited Reissue 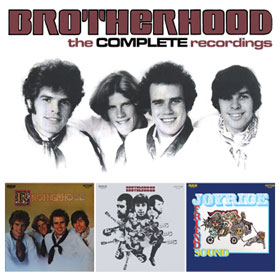 Readers who check out my writing more than occasionally will know of my keen interest in the music and the history of Paul Revere and the Raiders. One of my earliest memories – as a toddler in Poughkeepsie, NY, an hour or so north of New York City – is seeing a group of Revolutionary War-era-coats-and-hats-plus-tights-clad musicians romp around on the TV set. Of course that was Where the Action Is, a program that ran on ABC-TV every afternoon from June 1965 to March 1967.

My first connection to the group and its members (current and former) came not so terribly long ago, in early 2010. I reviewed a new 3CD set on Collectors Choice Music, a compilation of all the group’s A- and B-sides. I had known their hits, but was quite impressed at the depth and breadth of their style and abilities as showcased on that set.

I followed that up a few months later with a feature on the band, originally penned for England-based Shindig! Magazine. I was (and remain) proud to have that piece featured as the cover story; I was later told by the publishers that my story – which included interviews with several key players in the Raiders story – had elicited more reader mail than any previous story. Clearly the interest in this band – eternally snubbed from the irrelevant sham that is the Rock and Roll Hall of Fame – was latent.

I went on to write other pieces, including (just last month) an interview with The Raiders’ manager Roger Hart, in which the Pacific Northwest DJ tells the story of developing a written treatment for something he called Madness, something soon developed into The Monkees.

Among all that activity, I forged friendships with many of the people who have figured into the Raiders saga: former and current band members; current and former spouses/partners; friends, fans, sons, daughters, groupies, roadies…you name it. But the most significant of all of these (to date, anyway) was my deep research into a band called Brotherhood. The story of three escapees from the prime-era Raiders is – like so many stories – a cautionary tale, and it’s one that lay untold prior to my project. That feature is the most in-depth music-related piece I’ve published to date, and the original piece (which appeared in Ugly Things Magazine) helped reignite interest in this all-but unknown band.

Through a long and circuitous path, that resurgence of interest led to what we have now: an impending release – for the first time in any format since around 1969 – of the three albums Brotherhood released in the late 60s. I’m deeply involved in that project, having written the 24-page booklet (a revised and expanded version of my original Ugly Things feature – and designed the package. Brotherhood: The Complete Recordings will be out on Real Gone Music on February 4, 2014. That’s forty-six days from now, but who’s counting?

Me, that’s who. And also Phil “Fang” Volk, the surviving member of the band’s original trio. And it’s with Phil that I’ll be conversing about this upcoming 2CD release in a feature that will run right here in January. We’ll discuss a few topics that somehow didn’t make it into the exhaustive feature, and we’ll provide a bit of behind-the-scenes insight into the development of this new Real Gone Music release. And if I know Phil, he’ll share some heretofore unknown anecdotes from the late 60s. So keep an eye out for that.

All next week, I’ll be running my annual “Best Of” columns, taking a look at reissues, new music, DVDs and more. But I can tell you with certainty that I already know one title that is sure to be on my Best of 2014: that’s Brotherhood: The Complete Recordings.