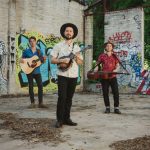 This is the third of three short features on Asheville-based artists releasing new albums in March 2020. Jesse Iaquinto released 2014’s Shadows and Dreams using the name Fireside Collective, but it wasn’t really a band project. “It was a solo album to kind of jump-start some of my original songs,” he says. But by 2017
Read More