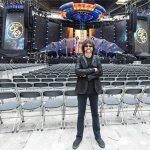 Serving up some good-timing musical nostalgia that hearkens back to a simpler time, Jeff Lynne’s ELO is currently on a major tour of the U.S. An international phenomenon of the 1970s, Electric Light Orchestra landed fifteen of its singles on the Top 40 charts in the United States. ELO began as a spinoff project of
Read More
The Move are one of those sixties groups that got lost in the transatlantic shuffle. They arguably had it all: great songwriting, strong vocalists, an a ready-made visual image. A near-perfect mix of super-catchy pop melodicism, heavier-than-heavy riffage, ambitious art-pop leanings and a penchant for controversy, The Move should have been huge in the USA.
Read More