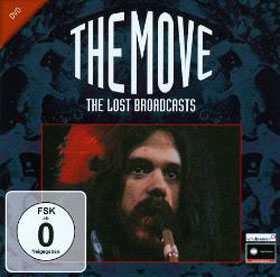 The Move are one of those sixties groups that got lost in the transatlantic shuffle. They arguably had it all: great songwriting, strong vocalists, an a ready-made visual image. A near-perfect mix of super-catchy pop melodicism, heavier-than-heavy riffage, ambitious art-pop leanings and a penchant for controversy, The Move should have been huge in the USA.

And they were pretty big in their native England. But when the group is mentioned these days, it’s often only in the context of having spawned (or mutated into, depending on how one reads history) Electric Light Orchestra.

Once again we have those wily Germans to thank for capturing a criminally-overlooked band in their audiovisual glory. A new DVD in the ongoing series, The Move: The Lost Broadcasts collects eleven television performances of The Move.

The first clip is a black-and-white Beat Club broadcast of “Blackberry Way,” and dates from the period during which Carl Wayne fronted the group. It’s presented in excellent quality, possibly sourced from the videotape masters. And the third clip is another b&w Beat Club spot, “Curly.” This one prominently features leader Roy Wood on recorder(s) and trading lead vocal licks with Wayne. The song musically points the way toward the band’s future direction. The track’s juxtaposition of medieval/folk textures with thundering bass lines would become a Move trademark. And Wood’s hair is not to be missed.

But it’s the remaining clips that are the real gems here. Documenting the very-late period Move, these tracks feature the lineup that crossed over into becoming ELO. From the earlier lineup came Wood and drummer Bev Bevan, and new members Jeff Lynne (vocals, guitar, piano) and Richard Tandy (not, as ELO fans might guess, on keyboards, but on bass and guitar) helped push the group in a more ambitious direction.

I am still trying to figure out who the second keyboard player on these tracks is; unfortunately, though The Lost Broadcasts includes a nice-if-short liner note essay, there’s no personnel info or airdate information in the package.

On “Brontosaurus” we can see a young, rail-thin Jeff Lynne for once without his omnipresent sunglasses. The shades are in place during “Words of Aaron,” a track which served to blur the lines between late Move and early ELO; it would have sounded completely at home on the latter’s No Answer debut LP.

The color clips are presented in stunning audiovisual quality, and they’re complete: no annoying voiceovers. These clips include the slate checks, and show the band standing still as the final notes of their tunes fade out. And breakdown takes are included as well: “Ella James” falters about a minute in, and the band takes a second (and successful) pass at the number.

Lynne takes the lead (and ditches the shades) for a pair of stomping renditions of “Down on the Bay,” a song that foreshadows ELO’s late-period move toward early rock’n’roll pastiches. The difference is that “Down on the Bay” rocks really hard; it’s easy to hear what the guys in Cheap Trick loved about The Move when listening to this number. The song’s brief rhumba interlude is a pure delight. The second pass at the song shows some album art visuals projected behind the band (the other tracks show them playing in front of a blue screen sans projections).

An important note: these tracks – the color ones, at least – don’t show The Move miming to pre-recorded tracks; they’re actually playing and singing. That reality might explain the band’s use of headphones; they were known as a deafeningly loud band.

By the time of these color tracks, The Move really was just Wood, Lynne and Bevan; the other two players (Tandy and that unidentified guy) were really auxiliary players brought on to round out the sound. The appear and disappear seemingly at random throughout these performances.

Wood’s stinging lap steel playing is the centerpiece of “When Alice Comes Back to the Farm,” a song even less well-known in the USA than these other tracks; it was left off of the Move compilation Split Ends, a collection that served to (belatedly) introduce the band to American audiences who wondered what Jeff Lynne had been doing “before” (sic) ELO.

Fans of sixties British rock and/or ELO simply must see this DVD.

Note: you may also enjoy another DVD from this series (and my review thereof) documenting Captain Beefheart & His Magic Band.