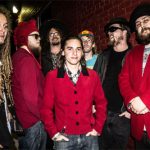 Jesse Talbott is a songwriter and the lead singer in Dr. Bacon, a band originally from Boone that relocated to Asheville in 2016. It’s difficult to pin down the musical […]
Read More