To those who celebrate, have a very merry Christmas. Since many other traditions have a celebration around now (solstice, Kwanzaa, Festivus, etc.), I wish you happy those-things as well.  Me, I’m celebrating the holiday with family, food and drink. Lots of all three, in fact. Below is the full version of The Beatles‘ “Christmastime is
Read More
It’s that time of year again. In the USA, at least, the days after Thanksgiving is the unofficial kickoff of the Christmas season. And every year about this time, I find at least one Holiday-themed CD in my inbox. This year the disc of note is A Kool Kat Kristmas, a thirteen-track compilation of Christmas-themed
Read More
Halloween’s coming: October 31 is a mere two weeks away. Personally, it’s my favorite holiday: for several years I lived on one of my city’s busiest residential streets, the go-to location on Halloween. This upscale neighborhood (we were firmly at the bottom of of the street’s socioeconomic scale there, by the way) was very popular
Read More
A deep love and understanding of Celtic cultural and musical traditions; a foundation of classical training; and a fresh look at celebrating the Holiday season: that was the recipe for “Christmas in Scotland: Seasonal Music and Stories from Celtic Lands,” a holiday show at Asheville’s Isis Theatre on December 27, 2013. Hosted by award-winning fiddler
Read More
Okay, not everyone likes Christmas. Some are turned off by the commercial character of a day that is supposedly to commemorate the central figure of Christianity (a child who – most Biblical scholars agree – was born in the spring, by the way). Others dislike it for the music. I don’t subscribe to either of
Read More
Today I (like you, I hope) am taking a day off to enjoy time with those I love and cherish. Normal blogging will resume tomorrow; this is “interview week” on the blog. Thanks for stopping by; below are a couple little treats for ya. Follow “the_musoscribe” on Twitter and get notified when new features, reviews
Read More
I suspect I’m not alone in my thinking that holiday-themed albums are often greeted with some trepidation. Oftentimes saccharine sentimentality trumps all, and the results are mawkish, half-baked or otherwise ill-advised. For every “Happy Xmas (War is Over)” there are three like “Wonderful Christmastime.” The occasional inspired concept album comes along: witness The Husky Team‘s
Read More
Every year around this time, various artists and labels take a shot at getting their piece of the holiday shopper’s dollar. Some efforts are more successful than others, and sometimes good collections fly under the radar. Today we’ll take a look at four titles aimed at the 2010 holiday season. Christmas With the O’Jays is
Read More 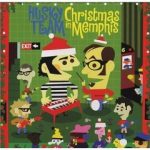 Way back in ancient history (well, late 2002) a bunch of friends and musicians dubbed themselves Husky Team and got together for a quick, one-off project: recording a bunch of holiday classics with a twist. What they did and who they are make this a worthwhile departure from the normal let-it-snow Christmas collections that come
Read More