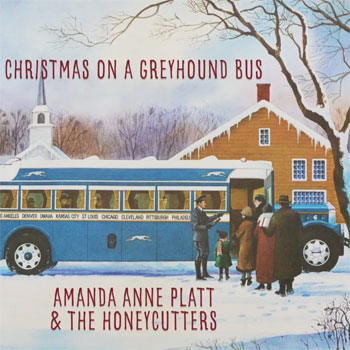 When an artist releases an album (or EP) of holiday music, it need not be designed to fulfill an obligation to a label. It also needn’t be a placeholder while a creatively spent artist treads water, waiting for the muse to return. And it doesn’t have to be a schmaltzy, pandering and overly sentimental collection of songs.

It’s true, however, that quite often a Christmas album is one or more of those things. The rare release that avoids those negatives has the opportunity to be something special, perhaps even to add to the holiday equivalent of the Great American Songbook.

A middle path is to make a holiday record free of cynicism, but with the modest goal of merely having some fun and sharing that with listeners. And it’s into that perfectly respectable space that comes Christmas on a Greyhound Bus, a new five-song release from Asheville’s own Amanda Anne Platt & the Honeycutters.

Platt has been on a creative surge in recent years. Featuring strong songwriting and note-perfect musicianship, 2017’s Amanda Anne Platt & the Honeycutters may well have been her finest studio outing. And this year’s two-disc Live at the Grey Eagle underscored the point that not only are Platt and her band superb musicians who get everything right when it comes to creating what one might call modern classic country, but they’re superb interpreters of the work of other songwriters. The Grey Eagle set included readings of songs by the Bee Gees and Rolling Stones; Platt and her band made the songs their own while remaining true to the composers’ vision.

Platt goes from strength to strength, choosing two lesser-known but solid Christmas-themed songs for her EP. Buck Owens’ 1965 single, ”Santa Looked a Lot Like Daddy” struck a balance between humor and sentimentality, and the Honeycutters’ knowing cover of the song suggests that they appreciate the complicated mix of emotions that the holiday season can bring. The playful twang of Owens’ version is kept in the Honeycutters’ reading, albeit with fewer guitar fireworks.

Willie Nelson recorded his “Pretty Paper” twice: once in 1964 and again as the title track for his 1979 Christmas album. And the song was first cut in 1963 by Roy Orbson, who scored a hit with it. Platt’s spare reading of the song is a weeper in the best sense of the word.

The third cover song on Christmas on a Greyhound Bus isn’t a Christmas song at all. Nick Lowe’s “(What’s So Funny ‘Bout) Peace Love and Understanding” is by now something of a standard. Lowe first cut it in 1974 with his band Brinsley Schwarz, and it’s long been part of his live set. Elvis Costello and the Attraction recorded a fiery reading of the song in 1978. And when Curtis Stigers’ version of the song was featured on the soundtrack of the 1992 film The Bodyguard, the song entered the consciousness of the wider public.

The pair of original songs on the EP stand up well alongside the covers. Save for its chorus, the title track could find a place of honor on a regular Honeycutters release. And “One for the Ages” is a lump-in-the-throat observation on the differing Christmases that people can experience.

Its brevity makes Christmas on a Greyhound Bus an EP, but its quality rivals the best full-length releases from Amanda Anne Platt & the Honeycutters. It’s primarily a gift to the band’s existing fans, and would likely be a treat for new listeners as well.