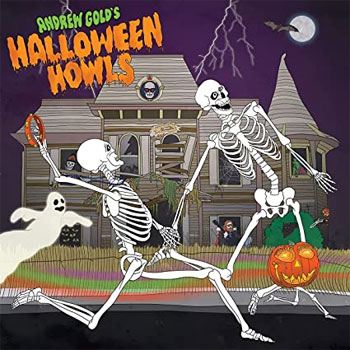 Musician, singer and songwriter Andrew Gold combined a commercial (read: broadly accessible) sensibility with superb songwriting chops. With so many years having passed, many forget (if they knew at all) that Gold was Linda Ronstadt’s band leader through one of her most creatively fertile periods.

Speaking of forgetting, it’s too often forgotten now, but his “Thank You for Being a Friend” was a hit single long before it was repurposed as the theme song for television sitcom The Golden Girls. While that use may have helped Gold’s pocketbook, it didn’t do much for whatever hip quotient* he might have had.

Gold passed away far too prematurely in 2011, months before his 60th birthday. A new reissue of his forth solo album isn’t likely to dissuade those who find his work unhip, but that reality doesn’t make Andrew Gold’s Halloween Howls any less fun.

Originally issued in 1996 (on CD and cassette only), Andrew Gold’s Halloween Howls was a twelve-song set on the Music for Little People label (my kids were quite young then, and we owned more than a few MFLP titles, though I was unaware of this one).

Judged for what it is, this is an enjoyable record. With his vocal treated to sound like a monster, Gold introduces that album before launching into a bunch of silly tunes like “It Must Be Halloween,” designed more to entertain than to terrify. Clean, simple and uncluttered arrangements go heavy on theatrical vocals, sound effects and catchy melodies.

Pals Stephen Bishop and Linda Ronstadt stop by to help out on a cover of “The Monster Mash.” In Gold’s hands the song doesn’t really present anything new, but neither is that its intent. It’s better-recorded than Bobby “Boris” Pickett’s single, so there’s that.

His cover of the theme from The Addams Family hews so closely to the original that listeners might thin it was lifted from Television’s Greatest Hits. All that’s missing is the gravelly intonations of Ted “Lurch” Cassidy.

The same is true for Gold’s cover of “Ghostbusters,” another near carbon copy of the popular original, right down to the synth drums and kid chorus. David Cassidy helps out on the Gold original “Halloween Party.”

The album’s most popular track – a previous release is on Spotify, and this track has received nearly 18 million[!]] plays – is “Spooky, Scary Skeletons.” Doubling down on its popularity, the new LP reissue of the album appends the original track listing with an “Undead Tombstone Remix.” Apparently that mix – which, truth be told, might give listeners of a certain age a pounding headache – outpaced the original in number of plays online.

The new reissue replaces the original artwork with something a bit more kid-friendly. An opportunity may have been missed, though: the record isn’t translucent orange; it’s plain old black vinyl.

*Postscript: Andrew Gold was in fact super-hip, damn it. Shortly after finishing this project, in 1997 Gold applied his prodigious talents to what may well be the crowning achievement – or at least the most unheralded gem – in his catalog. Still in one-man-band mode and dubbing himself The Fraternal Order of the All – an American answer to the Dukes of Stratosphear – he made an album called Greetings from Planet Love. This retropsych masterpiece – with a spot-on pastiche of The Beach Boys’ “Our Prayer” crossed with The Beatles’ “Being for the Benefit of Mr. Kite” called “Tuba Rye and Will’s Son Balloon in the Sky” – simply must be heard. But I digress!