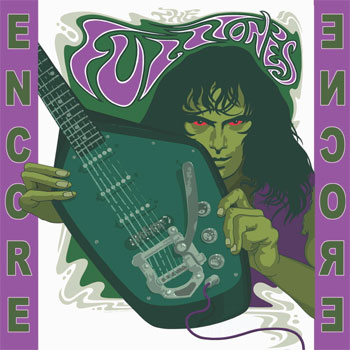 For forever now, The Fuzztones have been bringing their trademark version of garage punk to enthusiastic listeners. In recent years, main Fuzztone Rudi Protrudi has turned his focus toward tributes, books and films, all of which have helped to cement the group’s place in rock’n’roll firmament. What there hasn’t been a lot of is new – truly new – music from the band. Here at Musoscribe World Headquarters, we’re happy to grade on a curve as it were, owing to the difficulties brought on by the two-years-and-counting global youknowwhat.

A new EP from The Fuzztones serves up a bit of new material alongside archival recordings that haven’t previously seen the light of day. Taken as a whole, they’re a solid reminder of what makes The Fuzztones special, and they whet appetites for more new music.

Encore opens with a new track, “Barking Up the Wrong Tree.” Now, I don’t know that the world was clamoring for an “I’m not gay so no thanks” kind of song, but that’s what this is. Lyrics aside, it sounds like a ‘66 classic. The remainder of the disc serves up covers of songs so obscure, even the most inveterate aficionado of Nuggets, Pebbles, Back from the Grave and so forth may find something new. “Plastic People” isn’t the Mothers’ tune; it’s a malevolent number originally cut by hard psych rockers Wildwood.

The heavily-reverbed “Marble Hall” was originally recorded by a Canadian band of the same name, released in 1970. Its slow pace is a bit outside The Fuzztones’ typical wheelhouse, but they deliver it in style. Much closer to the tried and true Fuzztones aesthetic is “Eyes in the Back of My Head,” first cut by fellow modern-day garage-psych travelers The Bevis Frond. Like most of the tracks on this EP, the band is Protrudi overdubbing guitar, bass and vocals, plus keyboardist Lana Loveland and drummer Marco Rivagli.

For reasons that remain unclear, the physical EP adds two bonus tracks (the streaming version includes only one). A version of “Let’s Live for Today” is noted as “featuring The Grass Roots,” but neither the CD package nor the press one-sheet explains the nature of that band’s participation. The song is played straight, with bits of fuzz guitar accenting an arrangement that’s ultimately quite faithful to the original. A more interesting approach might have been to cover The Lyres’ “Not Looking Back,” a song that quotes the Grass Roots song’s signature lick during a keyboard solo.

And a cover of The Sonics’ “Santa Claus” – itself a thin rewrite of The Premiers’ “Farmer John” (itself a retread of “Louie, Louie” if we’re being honest) – ends the set with a bit of tail-chasing. Played with verve and plenty of distortion, it’s a delight. Unpretentious as it is, the song underscores the fact that while there may not be much new under the sun in the land of garage rock, it’s still plenty of fun.