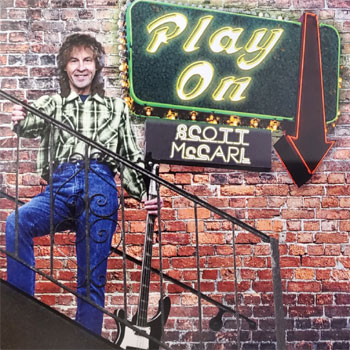 Thought I’d give readers a HEADS UP on this new release. (I’m here all week, folks. Tip your server.)

I am sure we can agree as to the wonderfulness that is The Raspberries’ catalog. “Go All the Way” is pop perfection, taking the “don’t bore us; get to the chorus” aesthetic to the extreme in its quest for rock’n’roll transcendence. And though they released only four albums in their ‘70s run, what a great set of records they are.

As the band’s original lineup began to fray – due to the dominance of one member in particular – the group lost its rhythm section. Undaunted, the aforementioned member (whose name I shall not type) brought in new musicians to fill the vacated spaces. On bass came one Scott McCarl. And far from taking on the role of do-as-you’re-told sideman, McCarl co-wrote four of the alum’s songs and composed another (“Rose Colored Glasses”) on his own. He also sang lead on several of the album’s tracks. His contributions would end up being a significant part of what made the group’s fourth studio album Starting Over the creative success it was.

Alas, the band broke up after that record’s release. Not counting subsequent reunions and live sets, Starting Over would be the final word from The Raspberries. The group went out on such a high note that it’s fair to wonder what might have happened had they remained together to make a fifth LP.

We’ll never know. But one possibility — and a tantalizing one at that – is that a theoretical fifth Raspberries album might have sounded a whole lot like Scott McCarl’s solo release Play On.

Taking its title from McCarl’s most well-known co-write on Starting Over, the album was released in 1997, some 23 years after the Raspberries’ studio swan song. And it’s every bit the creative equal of that record. Even without the involvement of the afore(non)mentioned ‘Berries member, Play On is a bouquet of pop delights.

Most of the ten songs on McCarl’s solo debut were recorded in the mid 1990s. But as was so popular in that era, the CD was stuffed with and additional seven bonus tracks. Those songs date from earlier sessions, primarily circa 1981 but in one notable case dating back to 1970, several years before McCarl was involved in the Raspberries.

And it’s that 1970 cut, “I Hope” that reveals something quite important about this singer/songwriter/multi-instrumentalist. While upon his joining the Raspberries, there might have been some thought that perhaps he was a hired hand, McCarl clearly already had a style of his own, fully formed. And as “I Hope” makes plain, that style was remarkably similar to what The Raspberries were doing. A full two years before “Go All the Way” hit the airwaves, Scott McCarl was turning out a pop jangle classic of his own.

Sure, “I Hope” is impossibly Beatlesque; its immortal melody, soaring backing vocals and warmly familiar Rickenbacker- and Gretsch-flavored guitar tones will take listeners back to the banks of the Mersey River circa 1964. But if you’d never heard it and someone played it for you, telling you it was proto-Rapsberries (or The Choir, perhaps), you’d readily believe ‘em.

And “I Hope” is but one song, one among a raft of crystalline pop melodies. I can assert that Play On really should have been a big hit, but as fans of the powerpop style have long since figured out, the world doesn’t work that way. Released on a small label, the record didn’t make a commercial splash.

Fast forward a quarter-century. Now we find ourselves with a new album from Scott McCarl, again titled Play On. Is it a reissue? No, not quite: four of the album’s ten core tracks have been dropped, as have four of the seven “bonus” recordings. In their place come some “new” archival recordings and a pair of new (2021) songs.

Remarkably, other than a few instrumental flourishes, the tracks on this newly reconfigured Play On – variously recorded in 1970, 1981, 1995-6 and 2021 – all hang together as a cohesive whole. McCarl’s compositional style and arrangement ideas have been remarkably consistent, and uniformly superb. His Beatles fixation is front and center on songs like “I Think About You” (from ‘81). The vocals and bass are McCartneyesque, and the lead guitar solo sounds like solo-era George Harrison.

Occasionally, McCarl’s melodies have an unnervingly familiar character: one of the new tracks, “Doin’ it Right” is perilously close to “Save the Last Dance for Me.” And a 1996 recording featuring The Rubinoos, “In Love Without a Girl” sounds exactly like what you’d expect: a cross between McCarl’s old group and the Bay Area pop heroes. 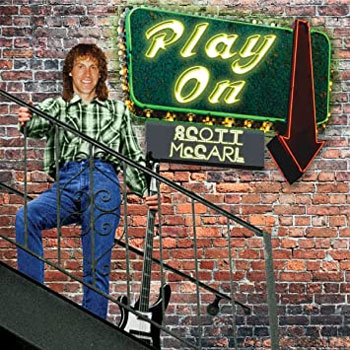 But in these cases, familiarity breeds not contempt but fulsome praise. Thirteen songs with nary a dud among them, Play On really does sound like the Great Lost Raspberries Record.

Okay… with those plaudits made plain, I shall move on briefly to a few mild criticisms and reservations. While the packaging of this CD release from Liberation Hall helpfully provides track information (year of recording, personnel) for most but not all of the tracks, nowhere is the listener given any indication as to why the album has been significantly re-jiggered from its original 1997 track listing. 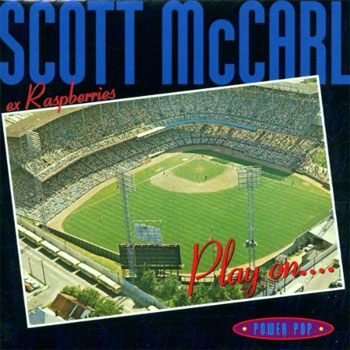 Original cover graphics that — while trying too hard — are more appealing than the new cover.

Bizarrely, the original album’s cover art has been abandoned in favor of a strangely generic cover shot. (They could have just used the old stadium photo and simply done away with the too-on-the-nose “ex Raspberries” and “power pop” proclamations plastered across the cover.) And for this new cover, some laughably ham-fisted Photoshopping has been employed: McCarl’s head has clearly been flown in from another photo and appended to his body; it’s far too large for the torso and is just weird enough that I can’t bear to look at it for more than a few seconds. Unforced error, that, though I should note that some digital reproductions of this new cover art seem to have corrected this problem (see example).

In the end, of course, none of this takes away from the scintillating brilliance of this album, one recommended in the most enthusiastic terms to lovers of swoonworthy melodies. And get this: Liberation Hall has plans for a vinyl release of this record, slated for later this year. That’ll be one to get.