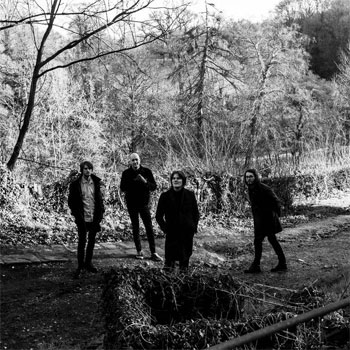 This Manchester outfit released its self-titled debut in 2019, and has continued in earnest on a creative path in the months since then. A single, “It’s Easy (If You Try)” was released in December ‘20, and another track, “Circles” debuted around the same time. Now the band’s second long-player, Everything About the Be Positives has seen release in October of this year.

If your idea of music from Manchester centers on the baggy/druggie Britpop of the ‘90s, you’re in for a surprise. The bracing, straightforward melodicism of The Be Positives has more in common with Supergrass, crossed with bits of Badfinger. There’s a gleaming, chrome finish to the sings, but they’re not slick or cynically sourced.

There’s a nice balance of sophistication and muscle in the eleven song on this collection. The band isn’t operating strictly within the framework of powerpop, but the best values of that style are evident. “I Jist Want to See Here” springs forth from the same well of exuberant creativity that gave us The romantics “What I Like About You” four decades ago. But The Be Positives add some creamy vocal harmonies that showcase a sonic palette that expands beyond powerpop.

And that’s merely one set of musical textures. “Only What I Feel” has a vibe a bit like The Spongetones, which is to say that it’s Beatles-influenced yet original. And again, some well-placed backing vocals and harmonies elevate the tune to the level of something special.

“Please Please Please” has nothing in common with James Brown; no, in fact it sounds more like “Back in the USSR,” with some appealingly overdriven lead vocals and an insistent electric piano that may conjure images of John Lennon playing a Vox organ with his elbow.

But I don’t want to make too much of Beatles influences; The Be Positives have their own sound. It’s simply that coming from a city only 35 miles form Liverpool, they draw from some of the same wells of inspiration.

That said, “Everything About It / Lost & Found” is warmly reminiscent of Wild Life-era Wings. “Rain & Stormy Weather” is every bit as appealing – perhaps even more so – but doesn’t have a Beatle-y whiff about it. And for a rocking guitar band, The Be Positives sure do know how to work electric pianos into the mix. To wit: the roughly bouncing “Goodbye,” which adds some soaring guitar chords that reach for the sky, and clever tempo shifts. And more great harmonies!

Let’s hope that this album is misleadingly titled. As good as it is, I don’t want it to be Everything about the band. More, please.