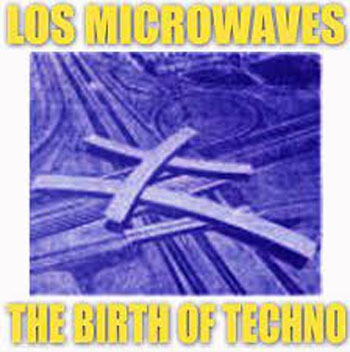 (Please visit yesterday’s post for some additional background on this release.)

This playfully titled release features David Javelosa (on synth and vocals) along with Meg Brazill (on bass and vocals) plus drummer Todd “Rosa” Rosencrans (two other musicians appear on selected tracks). Side One features five studio tracks, none of which were included on the band’s 1981 Posh Boy LP, Life After Breakfast. Three of these tracks were recorded in ‘82; there’s no information regarding the provenance of the other two songs.

The records’ second side collects five live recordings, capturing Los Microwaves onstage in New York City (The Peppermint Lounge) and Boston as well as at San Francisco’s own I-Beam, a venue that often played host to the band (with and without Baby Buddha). Those tracks date form roughly the same ear, 1980-83.

Sonically, Los Microwaves are similar to Baby Buddha, but with a less whimsical, more punk-oriented character. That’s not to say that the band isn’t having fun: clearly they are. The songs variously recall Blondie, Flying Lizards (again), Gang of Four and a far less dour Human League. Importantly, the band rocks, even when it’s employing a spare drum kit, solid but elemental bass, and monophonic analog synthesizers.

“Sniper,” the opening track on the live side, dates from a 1980 I-Beam set. The thin, bootleg-quality audio is feature, not a bug. The band is on target, conveying an energy only hinted at by the studio tracks. The stripped down aesthetics of the group – necessitated by its minimalist instrumental approach – are nonetheless thrilling. Even if you weren’t there in 1980 (and I wasn’t), this’ll take you back.