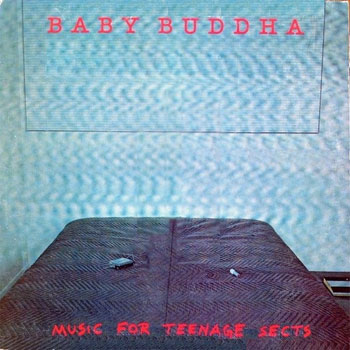 My deep dive into the history of San Francisco-based indie record label 415 Records has yielded a book, Disturbing the Peace: 415 Records and the Rise of New Wave; it’s due out in a matter of days, and is available for pre-order now . And while I came into the project knowing a good bit about the most well-known acts on the label (Translator, Wire Train and Roky Erickson chief among those), I discovered nearly two dozen bands whose work was new to me.

One of those was a clever performance-art project called Baby Buddha; that group released but one record on 415, and it was a promo-only 45. As such its flew under most listeners’ radars; certainly Baby Buddha’s Dada take on Tammy Wynette’s “Stand By Your Man” went largely unheard outside the domain of innovative college-rock radio programmers who found themselves with a copy of the seven-inch record.

As I learned, Baby Buddha really was less of a band than a project; a side project in fact, for some members of another group, Los Microwaves. The two “bands” would often share a double bill at some of the Bay Area’s music venues; that meant some musicians were in fact opening for themselves, not the worst way to score a bit of extra money at the end of an evening. Two new records – one a reissue, the other an archival release – bring these two closely intertwined projects back into focus for the 21st century.

Baby Buddha would eventually record and release an album, 1981’s provocatively-titled Music for Teenage Sex. That LP wasn’t a 415 release; instead it came out on Robbie Fields’ L.A.-based Posh Boy label. Good condition used copies are not prohibitively expensive, but neither are they cheap. 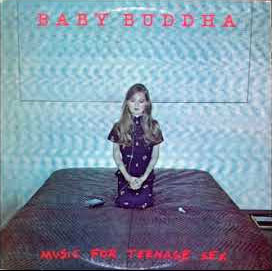 Happily, the project’s guiding creative light, David Javelosa has recently seen to a vinyl reissue of the now-40-year-old record, mystifyingly retitled Music for Teenage Sects. The album cover is slightly different as well: it displays a bedroom scene like the original LP, but with the young female model absent (Photoshopped out? Alternate photo?) of the image. The new release (on Javelosa’s own Hyperspace Communications label) also features a gatefold sleeve, and the inside panels display a lively collage of Baby Buddha-related ephemera (photos, buttons, gig posters and the like). My copy also features a beautiful translucent blue vinyl pressing.

Baby Buddha was always a playful-in-the-extreme project. While I’ve compared their deconstruction of “Stand By Your Man” (both parts of which are included on this LP) to the work of The Flying Lizards, Baby Buddha always seemed to be having more of a giggle with the whole concept. While the instrumentation is a kind of po-faced indie synthpop, vocalist Kathy Peck sings it straight, Tammy-style. The juxtaposition is deeply weird, but it works.

Baby Buddha was/is Javelosa and musical partner Charles Hornaday; the remaining cast of characters would come and go as needed or available. At its core, the album features Javelosa and Hornaday playing instruments and providing their own whacked-out vocals. “We Are Not” sounds like Human League stuck in a car with The Residents. And their cover of “All Shook Up” sounds like a musical kin to those inscrutable eyeball guys too; it wouldn’t be out of place on Meet the Residents.

“Your Cheatin’ Heart” builds upon the country-synth mix showcased on “Stand By Your Man.” Peck returns in her Tammy Y-Not guise; the mix sounds as if she’s in the next room, perhaps with headphones on and singing along to the originals, while in this room, Javelosa and Hornaday are playing their own bizarre retool of the song, with little regard for the original.

There’s a track on the LP called “My Generation,” and the composer credit is Pete Townshend. But I defy listeners to spot anything about the recording that has anything at all to do with The Who’s song. Just plain weird, it is. “Little Things” is a house-of-mirrors, scary track, with spoken-word vocals by Los Microwaves’ Meg Brazill and label head Fields.

Against the backdrop of these odd tunes, the comparatively normal cracked pop of “All Night Long” is even stranger than it would otherwise be. An unexpected, demented guitar solo(!) is among the song’s highlights.

Definitely among the stranger releases of the new wave era, Music for Teenage Sex/Sects could perhaps only have been created when and where it was made. But on the occasion of its 40th anniversary, the music sounds as weirdly wonderful as ever.

Come back tomorrow for a look at Los Microwaves’ The Birth of Techno.